Halflight, Spear of the Church

Halflight, Spear of the Church

The Spears of the Church watch over the Princess' slumber, and this serves as proof of their fulfillment of their duty. The embellished gold cloth is woven with a crest of young grass.[1]

The Spear of the Church is a unique boss and has a mechanic similar to that of the Looking Glass Knight in Dark Souls II.

If the player is offline, the fight functions very similar to most fights with NPCs. Halflight wields the Frayed Blade and makes frequent use of the Ritual Spear Fragment. Occasionally, magic orbs that function similar to Homing Soulmass will appear around him, appearing more frequently if the player has more summons.

If the player is online, however, they will likely fight another player and the fight will effectively be a PvP match. However, this is not a duel, and the player summoned to be the boss will have increased defenses and the magic orbs will automatically appear around them through intervals of time. Similar to Halflight, the player will gain higher defense values and the magic orbs will appear more frequently the more summons the host has. The boss player also isn't capable of using their Estus Flasks to heal, but can use healing miracles.

Summoned Church Guardians are weak against Frost, Lightning, Fire and resistant against Bleed, Poison/Toxic. They also can't be rapported or allured. Vow of Silence is helpful while facing them, as it will block healing miracles.

Found in The Ringed City, inside the Church of Filianore, just after the Darkeater Midir encounter at the bridge past the Shared Grave bonfire.

The Spear of the Church is a servant of Judicator Argo, and works to preserve Filianore's slumber.[1] One of the last recorded warrior among them was a young man named Halflight, a former missionary from an ancient land of sorcery, who decided to stay behind and defend the church.[2][3]

While the player enters boss fight arena, Judicator Argo will give a speech about violating Filianore's slumber, which gives player enough time to buff weapon or cast spells. A few second later the first Church Guardian appears (second, when Spear of the Church hp is lowered by 40-45 percent). After ending this speech, Argo vanishes and Spear of Church appears (or Halflight, if Argo fails to summon player on time or player, which tries to break Filianore's slumber, is offline).

Unbreakable Patches: After completing Amnesiac Lapp's questline, he can be summoned for the fight. His summon sign is located behind the right door of the cathedral. 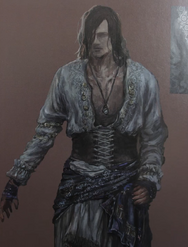