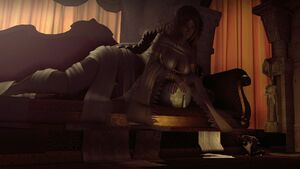 "Magnificent... Thou hast filled the Lordvessel. Indeed, a worthy successor, thou shalt be. My patience was not for nil... I beg of thee. Succeed Lord Gwyn, and inheriteth the world's Fire. We have only thee."
— Gwynevere

She is voiced by Clare Corbett, who also voiced the Undead Female Merchant and Crossbreed Priscilla.

Gwynevere appears in the form of a gigantic, fair lady with red hair and a kind face. A light shines brightly behind Gwynevere's figure. She is dressed in white cloth and rests on a cushion underneath her arm.

Gwynevere is located in Anor Londo, in a room above the hall where Ornstein and Smough battle the Chosen Undead, behind the door with the bonfire in front of it.

Gwynevere is the second born child and first daughter of the former Lord of Sunlight, Gwyn, and was cherished by all as a symbol of bounty and fertility. Along with many of the other gods who resided in Gwyn's kingdom, the Princess of Sunlight eventually abandoned Anor Londo and later married the God of Flame, Flann[1] and raised several children with him.[2]

Gwynevere's miracles, Bountiful Sunlight and Soothing Sunlight, were granted to her maidens and were used to "aid a great many warriors".[3]

The "Gwynevere" that greets the Chosen Undead when they reach Anor Londo, is in actuality an illusion created by her sibling and younger brother, Gwyndolin,[4] for the ultimate purpose of manipulating the Chosen Undead into linking the First Flame.[5]

Upon meeting with Gwynevere for the first time, she grants the player the Lordvessel, which enables the ability to warp between most bonfires. Gwynevere can also initiate players into the Princess's Guard covenant.

Killing Gwynevere, which requires a single hit with any attack, will reveal that she is an illusion created by Gwyndolin. Gwyndolin then removes the rest of his enchantment, causing the sun to permanently set in Anor Londo. In addition, any player that darkens Anor Londo will become more susceptible to Blade of the Darkmoon invasions when human. All deaths within Anor Londo will return the player to a specific bonfire in that stage, regardless of the last bonfire used. In addition, all regular enemies will vanish, except Painting Guardians, a few Silver Knights and two new hostile characters.

Gwynevere, in the Princess's chamber.