A thin red drake trapped in a cage in Aldia's Keep. Three are later encountered as non-respawning enemies in Dragon Aerie.

Only in Scholar of the First Sin: There is one at Heide's Tower of Flame, in front of the drawbridge leading into the Cathedral of Blue.

The Guardian Dragon guards the way to Dragon Aerie. Aldia commanded him to stay there as an experiment, seeing how the dragon would react.

In Scholar of the First Sin, Sellsword Luet can be summoned from the bottom level of the large room with the dragon skeleton.

This boss isn't too complex. Most of its melee attacks are not much of a threat. Its most dangerous attacks involve its fire breath, which has a large area of effect. Staying underneath it while it is on the ground is a good tactic, as it has only one attack that can reach you there, and it is easily dodged.

As it is a dragon, it is weak to lightning. Make use of this weakness and the battle won't last for very long.

The Guardian Dragons in the Aerie will receive power boosts if the player destroys the eggs around the area. They will also become more aggressive and will attack on sight. If the player wishes to fight the dragons but has already broken several eggs, it is advisable to rest at a bonfire. This will respawn the eggs and reset the dragons' attack power to normal.

In this battle, mobility is better than toughness. Being able to run away at anytime from its fire attack beats trying to shield fire damage, and getting run down on stamina.

Stomp: The dragon attempts to hit the player with its foot. Easy to dodge out of the way.

Bite: The dragon lowers its head and bites to the side. Rolling under its body is a good method.

Tail Swipe: The dragon swipes its long tail twice behind it. Roll underneath it, as it may still hit you if you go to its side.

Ground Fire Breath: The dragon lowers its head and breathes a stream of fire towards the player. Deadly if it connects, but if not, then it offers a very good chance to wail on the dragon as it cannot do anything while this attack is in process.

Aerial Fireball: The dragon flies into the air and launches a single fireball at the player. Does a pretty good amount of damage and has a fair area of effect. Snap out of your lock on and sprint as far away from the dragon as soon as he flies up.

Aerial Fire Breath: The dragon flies up in the air and breathes fire at the ground. this fire radiates over a long range. Snap out of your lock on and run away from the fire.

Aerial Turning Fire Breath: The dragon flies up in the air and breathes fire around the arena while turning. Snap out of your lock on and run away from the fire.

Diagonal Fire Breath: Clings to the wall and breathes fire in a non-sweeping diagonal direction.

A Guardian Dragon in the Aerie 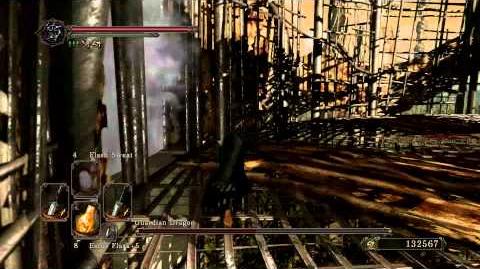 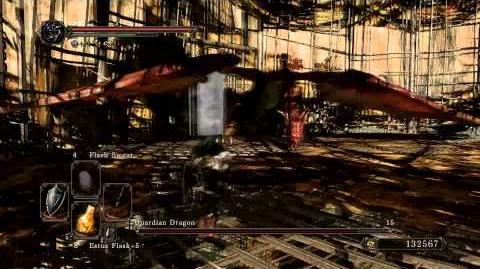