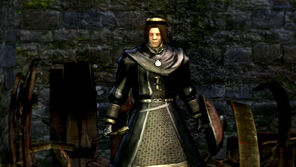 Trapped in a room at the bottom of the Undead Burg (in the alley before the Capra Demon fight), he may be rescued there using the Residence Key sold by the Undead Male Merchant.

After being rescued, he finds his way to the Firelink Shrine, where he stands under a ledge close to the well.

Should all of his items and sorceries be purchased, he will set off searching for his master, Big Hat Logan. He is doomed to fail in his mission and will turn up in Sen's Fortress as a hollow.

Griggs is trapped in a room while caught exploring. He has been searching for his master but cannot find him. After his rescue by the player, he expresses his gratitude by selling the player sorceries.

Griggs' ultimate goal is finding Big Hat Logan, and they do indeed get reunited if the player did not purchase all of Griggs' items before rescuing Logan. However, Logan will leave again, leaving Griggs with some of his knowledge. Depending on the player's actions, Griggs will then be hollowed in Sen's Fortress, or remain in Firelink Shrine until the end of the game.

Griggs is very fragile and his sorceries pose no threat. They deal insignificant damage and are easily dodged.

Griggs will not sell anything to the player unless they have at least 10 Intelligence.

* Only available once Big Hat Logan has arrived at, and left Firelink Shrine.

Blake Ritson, Griggs of Vinheim's voice actor, was supposed to be the voice actor of Artorias the Abysswalker as well.