Greatsword of the Forlorn

The Greatsword of the Forlorn is a greatsword exclusive to Dark Souls II: Scholar of the First Sin.

Greatsword of the Forlorn, who wander the land of the Undead.

The King's elder brother Aldia sought to overcome the curse through means unalike his sibling's.

The Forlorn were born of Aldia's sinful infatuation.

Purchased from Straid of Olaphis for 10,000 souls, once five or more Forlorn dark spirits are defeated, with the fifth, or latter, being a greatsword-wielder. The Forlorn found in Aldia's Keep do not count, as they are not invaders.

The Greatsword of the Forlorn is a very potent weapon, with the ability to deal massive damage in three different ways.

The weapon deals a great deal of both physical and Dark damage, as well as a good amount of Bleed build-up. This makes the weapon useful against most foes.

The weapon's main mechanic is that it, similarly to the Dark Pyromancy Flame and the Scythe of the Forlorn, scales with how hollow the player is. In human form, it will have an extremely low attack rating, while it will have a slightly above-average damage output when fully hollowed.

Its moveset is similar to that of the Charred Loyce Greatsword; however, two-handed light attacks are standard greatsword swings. 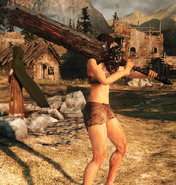 In-game
Add a photo to this gallery
Retrieved from "https://darksouls.fandom.com/wiki/Greatsword_of_the_Forlorn?oldid=328079"
Community content is available under CC-BY-SA unless otherwise noted.