Sif can be found in Darkroot Garden behind large, glowing doors, guarding the grave of Artorias the Abysswalker, one of Gwyn's four knights.

Artorias of the Abyss[]

Sif makes an appearance in the Artorias of The Abyss DLC. The player finds the wolf located behind an Illusory Wall after being led about by Alvina in the Chasm of the Abyss. Sif is found protected by a magical barrier, which was created by Artorias using his Greatshield in order to shield the wolf from the corruption of the Abyss. Upon reaching Sif after defeating the Humanity Phantoms, Sif will vanish and leave behind Artorias' shield. Sif can be summoned during the battle against Manus, Father of the Abyss, after being rescued by the player.

If the Chosen Undead saves Sif in the Chasm of the Abyss before killing Sif in Darkroot Garden, a different cutscene will play before the fight; however this will prevent you from meeting Kaathe, because you need to place the Lordvessel and visit the Duke's Archives to access the DLC. In the cutscene, Sif will recognize the player as they approach and let out a whimper. The protagonist reaches out to pet the wolf, but Sif pulls away and howls mournfully before sadly picking up Artorias' greatsword. The fight will continue as normal after this point.

Like all of Sif's attacks, this can be blocked. If Sif switches the sword to the right side the attack will be followed by a Sword Slam.

Sif repositions the sword to a straight position, and spins around twice. Causes massive stamina damage if blocked and can kill players if the slices connect. However, if Sif is at low enough health to where it is limping, Sif will only spin the sword once. Can be dodged by backing or rolling away before the attack is unleashed. Sif will pause afterwards, creating an opportunity for attack.

Sif slams the sword into the ground. Powerful, but has no tracking and poor hitbox. This attack is only used as a follow-up to Dashing Slice and Finishing Combo.

Sif will attempt to slice the player while jumping backwards and away from the player in one motion. Has little to no starting lag. Blocking it won't give the player an opportunity to attack, but will help the player survive.

Sif will do a quick chop from side to side. Good tracking and high hitbox. Possible to roll underneath it with good timing. Also does not do much damage to the stamina bar, thus it can be blocked quite easily.

Two slashes from side to side. Great tracking, thus very difficult to sidestep. However, the slices can be rolled under and blocked fairly comfortably without the stamina bar being fully drained. If Sif is at the point of limping, the wolf will fall on its side and struggle to get up on attempting the second slice, so use this to your advantage to do some damage.

Sif will slice twice and then finish with a Sword Slam. The last attack has poor tracking and a small hitbox, so use this as an opportunity to get some hits in.

In the Chasm of the Abyss. 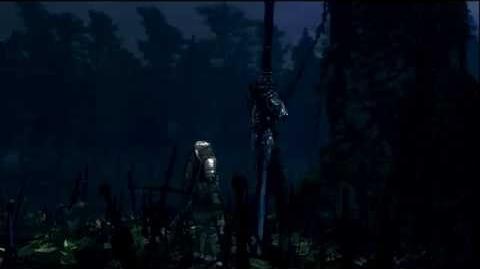 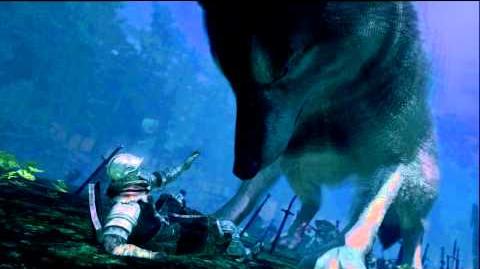