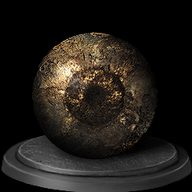 The Gravelord Servant covenant is a PvP oriented covenant in Dark Souls. Gravelord servants spread misery by using Eyes of Death to spawn black phantoms in other worlds.

The player must not have killed Gravelord Nito and must have at least one Eye of Death. There are some Eyes of Death close to where players can access the Gravelord Servant covenant. Basilisks found in the Depths and The Great Hollow also drop them rarely.

In The Catacombs, there is a row of coffins guarded by a Titanite Demon. One coffin near the end of the hall, but before awakening the Titanite Demon, has an open lid, which the player can nestle into. After about 30 seconds, given the player has no active phantoms, a short cinematic is played where the player is transported to an enclosed area. Pray to the "Sarcophagus Gravelord" there. The player must have at least one Eye of Death in their inventory in order to be transported by the coffin.

Gravelords level up by offering Eyes of Death.

Gravelord Servant is one of the tougher covenants to master. It is often difficult to get the right people to invade (sometimes agents of the Blade of the Darkmoon and Darkwraith covenants will invade anyway, and killing them does NOT yield Eyes of Death), and skilled players should have no problem defeating the Black Phantoms Gravelords sent to other worlds.

Gravelord servants also run the risk of being invaded by numerous people at once, which is almost never a pleasant situation. Oftentimes it is faster to simply farm Eyes of Death from Basilisks in the Depths to obtain them than actually use them in the way they are intended.

Retrieved from "https://darksouls.fandom.com/wiki/Gravelord_Servant?oldid=322818"
Community content is available under CC-BY-SA unless otherwise noted.