Lord Soul
Gravelord Nito, also known as Nito, The First of the Dead, is a boss, the leader of the Gravelord Servant covenant and one of the original Lords in the Dark Souls universe.

Gravelord Nito can be found at the end of the Tomb of the Giants.

Looking through the game's files reveals that Nito's body is that of an immensely sized human skeleton, though the ribcage is packed with bits of dead matter, and blown open as a result. The torso leans forwards as well, giving him a hunchback appearance, and his true skull is tucked into the dead matter and bones. His left leg is built like those on a dog or other four legged creature, while his right leg is humanlike, giving him a sort of handicap and reducing his movement to a slow limp. The other skeletons merely adorn him as armor, with his entire torso covered in ribcages and skulls, and arms and legs dangling all around him.

What was once an all concealing cloak looking like black fur or feather, apparently conjured at will, is reduced to a tattered hairlike cloak. When dormant, Nito did not seem to wear it until after generating a glowing fume of lavender white power, likely the "miasma of death and disease" he is known for. His left hand is natural, his right is equipped with a triple bone forearm, which terminates in a sharpened bone blade covered with the miasma.

Nito, the first of the dead, is one of the original Lords who found a Lord Soul at the dawn of the Age of Fire. His soul turned him into a living manifestation of illness and death, a mass of skeletons held together. He, along with the other Lords, waged war against the Dragons, and helped issue the killing blow by unleashing a miasma of death and disease upon them.[1]

After the war with the dragons, Nito descended into the Catacombs, and slumbered within the Tomb of the Giants. Even in that state, he could administer the death of all life and offered much of the energy of his own soul to death itself.[2]Travelers brave enough to find their way into his tomb would pay their respects and become a Gravelord Servant. They would use the Eyes of Death to cause hostile spirits to invade other worlds, spreading death throughout them, which allowed the multiplication of the Eyes of Death[3], which in turn allows death to increase exponentially. While Nito sees all death, and induces all death, his servants return with Eyes of Death to prove that they have done their tasks[4]. In return for their service to him, Nito accepts these offerings, and presents his servants with more power[5]

It is thought that Nito possessed the Rite of Kindling, a power sacred to ancient clerics, which allowed them to strengthen the flame of Bonfires[6]. At some point, a being known as the "Pinwheel" stole this power, holding on to it until the Chosen Undead defeated it and stole it for themselves. Nito's power was also sought after by occultists who wished to abscond with the power of Nito, to destroy the Gods, and perhaps the other Lords, though their plot was foiled and they died in Nito's domain[7]. These events are considered ancient history, in a timeline between the fall of Oolacile and the Chosen Undead's arrival.

At some point, Nito, also known as the "Great Dead One" created the Milfanito and the Fenito found in the Shrine of Amana and Undead Crypt respectively in Dark Souls II The Great Dead One created the Milfanito to comfort those bearing death and darkness, teaching the maidens a song for them to sing. The Fenito were created to ensure the deceased within the Undead Crypt rest undisturbed.

In their attempt to fill the Lordvessel with powerful souls, the Chosen Undead intrudes upon the underground cavern that housed the sarcophagus of Nito, who awakens and defends himself from his attacker. Even with him dead, his soul persists, as it is the manifestation of a fundamental concept.

When falling into Nito's domain, some damage will be incurred. This can be negated through use of the Fall Control sorcery. If Fall Control is unavailable, make sure to heal once landed, preferably with Estus as the other forms might not be fast enough to avoid Nito's ranged attack.

Nito is a very large, very slow boss with average HP. This makes large weapons and slow spells excellent candidates for dealing damage to him quickly. Nito's attacks often cause toxin and can be quite damaging, but almost all of them have a very long startup time and are easily avoidable. All of the attacks except the sword dance can be blocked.

Nito is aided by some minor Skeletons initially, and Giant Skeletons if the player ventures too far from the place they fell down from. Both types of Skeletons resurrect after being killed, unless they are killed with a Divine weapon (even with a Divine weapon a Phantom can't kill the skeletons, only the Host can). They are no tougher than the Skeletons found throughout The Catacombs and the Tomb of the Giants, but may prove to be a fatal distraction to fighting Nito himself. Because Nito is so slow, it is a good idea to kill all of his minions with a Divine weapon before engaging with him, so the skeletons will not get in the way. As long as you are not close to him, the only attack you have to watch out for is his Gravelord Greatsword (listen for the scream and start running). Wearing the Slumbering Dragoncrest Ring will help in avoiding confrontation with the Giant Skeletons at the back of the cavern.

He can easily be strafed behind for free hits, resulting in large amounts of damage – especially if attacking him with fire weapons or pyromancies (as he is weak to fire).

Nito slowly raises his weapon, then slams it into the ground. Difficult to block, but can be easily dodged. Also, Nito pauses for a few moments afterwards, leaving him open to attacks.

Nito thrusts forward with his sword. Can be blocked or dodged.

Nito swings his sword horizontally. Can be blocked or rolled under.

Only used by Nito when the player is either far away from him, or when they are out of sight range. After a scream, Nito plunges his sword into the ground, where it emerges from underneath the player, causing toxic buildup along with decent damage. It has a similar effect to the Gravelord Sword Dance miracle.

After pausing to charge the attack, Nito will expel a wave of darkness in all directions, causing Magic damage and Toxic buildup.

Nito's hand glows red, whilst also attempting to grab the player. If successful, it deals a great deal of damage to the player.

Nito in his coffin 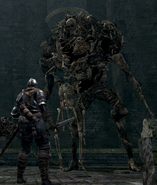 Nito without his cloak 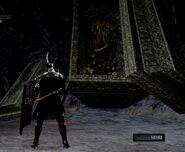 Nito as The Sarcophagus Gravelord 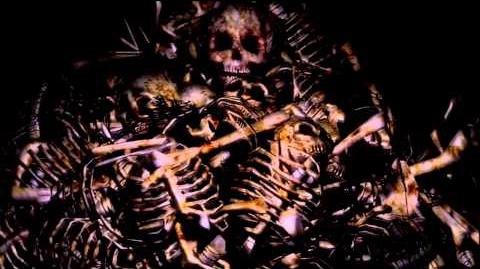