Gough's Greatbow is a bow in Dark Souls, and is found in the Artorias of the Abyss DLC.

This bow is larger than even those used by the famed Dragonslayers. Only their leader, Gough, had the strength to handle it. 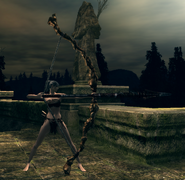 Add a photo to this gallery
Retrieved from "https://darksouls.fandom.com/wiki/Gough%27s_Greatbow?oldid=323420"
Community content is available under CC-BY-SA unless otherwise noted.