Cathedral of the Deep
Irithyll of the Boreal Valley
Irithyll Dungeon

A race of giants that were enslaved by the Church of the Deep, these mighty creatures now guard their darkest secrets from intruders. Most of them are several stories tall but the ones guarding the path to Anor Londo are significantly shorter, although still tower over the player. They are usually found sleeping peacefully but will retaliate with crushing blows when disturbed. All giants, barring the smaller variants, do not respawn.

Whilst sleeping, Giant Slaves take very little damage, so it is recommended to wake them up if the player wishes to fight them. Their attacks are very slow but deal tremendous damage and even the aftershock can cause injury. The easiest way to slay them is to wear them down with ranged weapons from under cover, although they will need to be aggroed to prevent them losing interest and falling asleep. This method can be used to defeat the first Giant Slave in the Cathedral of the Deep and the one in the basement of Irithyll Dungeon.

The two giants in the Cathedral reside in a pool of sludge that heavily restricts movement. If the player wishes to fight them conventionally, then they should stay behind the giant and attack its feet, this will avoid their arm swipes but they should still be mindful of their stomps. If engaging them at a distance, they can throw sludge at the player, so they should stay mobile.

The smaller giants in Irithyll are much weaker than the other versions and have a moveset very similar to the Giants of Dark Souls. They are most vulnerable after performing their frenzy combo, although it is recommended to eliminate the Deacons patrolling the area before engaging them, as they will periodically cast fireball spells which do a surprising amount of damage. 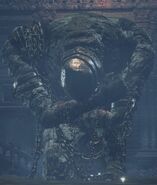 A sleeping Giant Slave in the Cathedral.
Add a photo to this gallery
Retrieved from "https://darksouls.fandom.com/wiki/Giant_Slave?oldid=329541"
Community content is available under CC-BY-SA unless otherwise noted.