Giant Archer of the Undead Settlement

The Giant Archer of the Undead Settlement is a character in Dark Souls III.

An unnamed giant reminiscent of Hawkeye Gough. He is similar to those other Giant Slaves found within the Irithyll Dungeon and the Cathedral of the Deep. The shackles he bears and grinds piercing through various parts of his body are evidence of an untold but surely sorrowful past.

A skillful warrior who took refuge on the highest tower of the settlement, now uses his mighty greatbow to defend the land from the monstrosities brought by the curse and which now lurk in this ruined and desolated realm. With astounding accuracy and arrows that explode upon contact, the road leading to meet him will not be an easy one, should one dare to cross his line of fire.

While his monstrous appearance may make one to think it twice before approaching him, once spoken to will reveal he is actually friendly and resolved to provide a helping hand to those who ask for it.

His presence is usually associated with places where young white birches grow. The branches of these trees are thought to be a "token of friendship", which the giant usually presents to those who have gained his trust. Once befriended, he will lend his extraordinary archery skills in some of the most dangerous areas found in Lothric.

Upon meeting and possibly befriending the giant, the player will have two choices: either let their new friend live to aid them while traversing a few dangerous areas in the game, or kill him to obtain the Hawk Ring.

If the latter option has been chosen, then he may be challenged at the top of his tower in the Undead Settlement; an easy task due to the small space where he is encountered at and which will severely compromise his mobility. In addition, the nearby staircase will provide complete cover from all of his attacks. The giant drops the Hawk Ring upon defeat, an accessory that allows arrows to travel a longer distance. 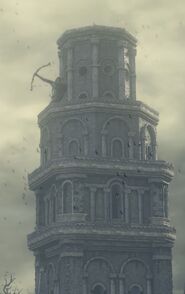 The Giant in the tower
Add a photo to this gallery
Retrieved from "https://darksouls.fandom.com/wiki/Giant_Archer_of_the_Undead_Settlement?oldid=330394"
Community content is available under CC-BY-SA unless otherwise noted.