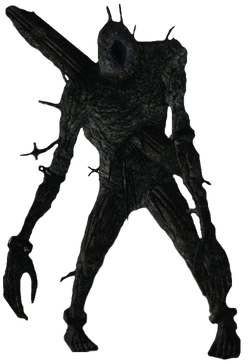 "The Giants are no ordinary barbarians. A singular rage burns within their hearts. My father, and his father, both fought the Giants on this very land.
The Giants have wills of steel."
— Captain Drummond

Giants are a race of enormous humanoids from a land vaguely described as "across the seas" from Drangleic. They can vary in size, but generally they tower over most beings. Possessing colossal strength, their willpower is said to be as strong as steel and their souls are incredibly powerful.[1]

Their heads are largely absent of facial features, apart from a large gaping mouth-like hole at the center. Its function seems to be similar to a mouth, as indicated by the roars that are emanated from within, but Giants have also been known to extract balls of poison and fire from them. Their bodies are covered in a rough, rock-like skin. The upper half of their bodies is generally bulky, with huge protruding shoulders and massive arms, however some are more slender in appearance. They largely wear rudimentary clothing, such as loincloths and ragged robes.[2][3]

Their brutish appearance and primitive weaponry has led some citizens of Drangleic to view them as being no more than uncivilized barbarians, but contrary evidence shows that they utilize magic and employ concepts such as monarchy and military hierarchy.[4][3]

Giants are primarily known through their conflict with King Vendrick and his kingdom. According to legend, a mysterious woman named Nashandra, said to be of unparalleled beauty, came to Vendrick long ago and warned him of a looming threat across the seas, in the land of the Giants. King Vendrick named Nashandra his queen and crossed the ocean with her to combat the Giants. During this conflict, he pillaged the Giant's lands, and stole an unspecified "prize", which he brought back to Drangleic.[2][1] Using this acquired power, Vendrick created various types of Golems, who in turn built Drangleic Castle.[1]

Seeking vengeance for the subjugation of his kingdom, the king of the Giants amassed an army in a vengeful counter-invasion of Drangleic. He also sought to reclaim the invaluable "prize" stolen from him.[4] Unwilling to forgive the actions of Vendrick, the Giants crossed the sea and landed on the northern shores of Drangleic. They set siege to Drangleic Castle and relentlessly attacked various settlements, forts and keeps across the land for several generations.[5][2]

Battles waged endlessly between Vendrick's forces and the Giants, and much of Drangleic's citizens fled the kingdom to escape the conflict. Ultimately, the Giants were defeated by an unnamed hero.[6] In the aftermath, much of Drangleic had been reduced to rubble, and visitors to the kingdom were rare.[7] Many Giants were killed in the conflict, and their corpses eventually grew into large trees that sprawled across the once prosperous kingdom.[8] The last known Giant to have survived the conflict was terribly wounded and kept prisoner in a cavern beneath the Forest of Fallen Giants.[9] It was later discovered another two Giants survived the war, but remained hidden in a cavern in Black Gulch.[3][4]

While the Giants invasion was largely stopped, their souls remained powerful. King Vendrick's elder brother, Lord Aldia, kept Giants in his manor and performed experiments on them in an attempt to recreate a dragon.[10] The outcome of Lord Aldia's experiments is unknown, but oddly when the Ancient Dragon roosting at the summit of Aldia's realm was slain, the soul of a Giant was found in its remains.[3] Legend holds that the Giants' resentment of King Vendrick was possibly emboldened in death.[11] This was proven true when the Bearer of the Curse fought the hollowed remains of Vendrick. With the souls of several Giants in the Bearer's possession, Vendrick was significantly weakened and subsequently defeated.[3]

Once the Ashen Mist Heart has been obtained, it can be used to interact with the corpses of three fallen Giants who fought in the war against Vendrick. The heart grants access to the memories of Jeigh, Orro and Vammar. In these memories, the player can witness various battles that took place between the Giants and Vendrick's army. According to Sweet Shalquoir, the Giants savour their memories of glory on the battlefield.

Giants specialize in several different types of combat and can be differentiated by their appearance.[4] Giants use their brute strength to great effect. Many of the soldiers who invaded Drangleic used large clubs, or even just their fists in battle. Some giants utilized a form of pyromancy, while others were known to have the ability to produce toxic projectiles from their bodies.

The king of the Giants who invaded Drangleic. This towering leader fought wearing his crown and wielding an enormous greatsword. He is encountered during the Memory of Jeigh.

Senior soldiers of the army of Giants. They're typically brown in color and wear a loincloth. They often wield two enormous, obelisk sized stone clubs in combat. Far larger and more formidable than their subordinates, the only Elite Giants to have survived the war reside in a hidden cavern in Black Gulch. They can also be encountered in the Memory of Vammar, Memory of Orro and Memory of Jeigh.

A more common, gray, shorter type of Giant that fights mainly with a large club or fists in battle. They can be encountered in the Memory of Vammar and Orro.

Relatively rare, this type of Giant looks similar to the Melee Giant, but can also throws balls of poison in combat. They wear a hooded robe and their left arm is coated in a green substance, which can poison anything it hits. This type of Giant can be encountered in the Memory of Vammar.

A Giant who exclusively throws balls of fire produced from the hole in their face. They wear a hooded robe and large engraved bracelets. Several can be encountered in the Memory of Vammar and Orro.

The Forest of Fallen Giants

The corpse of a fallen Giant

The face of a Giant in the Memory of Jeigh

A Giant as seen in the Dark Souls II "Despair" trailer