A strange race of creatures resembling avian satyrs, Ghru are tribal warriors that make their home deep within the swamps of Farron Keep. Despite their bestial appearance, they possess limited intelligence, utilizing weapons and poisons in combat.

The Ghru are one of the most varied enemy types in the game with five different variations encountered. Stronger versions, known as Smouldering Ghru, are found in the Smouldering Lake. They fight in the same way as their regular variants, although they can also inflict Toxic on the player.

Standard Ghru and their variants are some of the most difficult non-boss enemies in the game. They have a decent range of aggro and can close on a player quickly, with several different attacks. Those that are armed can do so with a larger reach, save for the variants wielding a spear and shield, which possess the standard thrust and swipe attack.

Unarmed Ghru are to be considered the most dangerous as they have a very well telegraphed, yet highly tracking grab attack. That can nearly kill most players, especially on their first play though and will most likely kill them on NG+. The grab attack will also buff the Ghru in return and empower their attacks and even apply a slight attack speed increase as well. Though poise remains unaffected in the exchange. Stun-locking the Ghru is preferable to a straight up melee fight. As they can easily do the same with either one of their combos. This is doubly so for the unarmed variants, as the attacks track at a moderate pace and the Ghru travels forward with each attack. Allowing it to pursue the player as they are knocked backwards from each strike. 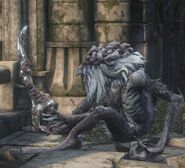 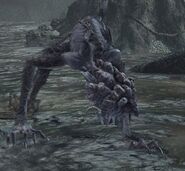 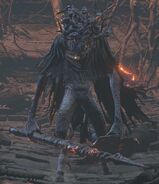 Smouldering Ghru
Add a photo to this gallery
Retrieved from "https://darksouls.fandom.com/wiki/Ghru?oldid=329539"
Community content is available under CC-BY-SA unless otherwise noted.