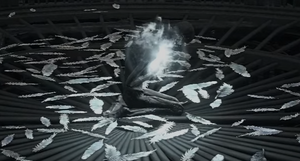 Gertrude, the Heavenly Daughter is a mentioned character in Dark Souls III.

Gertrude was a holy maiden to the Queen of Lothric. She is also said to be the Queen's child, according to a miracle which she taught to her knights. Gertrude was one day visited by an angel, and despite losing both her voice and sight, she wrote down the teachings she received and founded the Angelic faith of Lothric.

As the Angelic faith was not accepted by the Three Pillars of Rule, Gertrude herself was imprisoned and experimented on by the scholars of the Grand Archives.

Inside the Grand Archives, a corpse can be found inside a large birdcage. This corpse is surrounded by feathers and is clutching onto a miracle, the Divine Pillars of Light. This is presumably Gertrude, for her winged knights appear to be guarding the entrance to the cage.

Gertrude once possessed a chime, which was taken by the scholars.