Soul of the Fume Knight
Soul of Nadalia, Bride of Ash
The Fume Knight, also known as Raime the Traitor and Rebel Raime, is a boss in Dark Souls II: Crown of the Old Iron King.

Raime was one of Drangleic's most distinguished knights.[1] He used his favorite bird, the black raven, as his sigil.[2] He was considered by Vendrick as his left arm and was one of his most trusted advisors along with Velstadt.[2] However, he eventually clashed with Velstadt and was deemed a traitor by Vendrick.[2]

Having decided to leave Drangleic behind, Raime devoted his loyalty to Nadalia who gave him a new purpose.[3] Instead of using his ability to expunge black fog, he embraced it to always be by her side.[4]

Backward Slash: Used when the player is standing to Raime's right or left. He will quickly slash down and back with either his greatsword or the longsword, always using the weapon on the side where the player is standing. Very little tell, can be difficult to dodge. He will do the same move when in his second phase as well, only this time it is more powerful with a higher starting lag.

Four-hit combo: Raime will use the longsword in a three-hit combo, likely draining a lot of stamina if blocking and possibly guard-breaking the player. This can be dangerous as he can follow up the longsword attacks with a long, slow horizontal greatsword slash that deals high damage.

Overhead Smash: The Fume Knight brings his greatsword over his head then slams it down in a vertical smash. This attack does not track well and is easily avoided, allowing the player to counterattack. This also makes his greatsword crack stopping him from transitioning into the second phase. The effect lasts for 20 seconds and can be baited by using an item behind him such as an Estus Flask

Lunge: If the player has put some distance between his/herself and the Fume Knight, the knight will quickly charge the player and execute a lunge attack. This attack has a very obvious tell and is easily dodged by rolling to the right or left. Presents an excellent opportunity to counter. He will also perform this attack in his second phase, though it remains easy to avoid.

Fire sword: Second phase only. Raime will slowly swing his sword from the player's left to right, trailing fire in a small arc roughly 270 degrees around himself. Highly damaging, as this attack does both Fire and Dark damage, even the Gyrm Greatshield will not be able to fully block the flame's damage. Can be rolled under with precise timing, or avoided by standing back some distance (roughly the length of the greatsword) from the knight. Difficult to dodge due to its deceptively slow swing time. Can easily be dodged by rolling left into the attack as soon as the attack animation starts.

Fire orbs: Second phase only. Raime points his greatsword downward and slams it into the ground, emitting an area of effect fire attack. This attack also releases several fire orbs that expand outward from the knight, slowly spreading out as they go. As with the fire sword, this attack is highly damaging and difficult to avoid, especially if the player is close to Raime. The best way to avoid it is to roll back immediately when the player sees Raime turn his greatsword upside down, then wait for the fire orbs to spread out. If the player is far enough back, they can simply step through a gap between two orbs. Can also be rolled under, though one has to be very careful when doing so. Can also be parried using a spell-parry shield.

Outside the arena where the Fume Knight waits, there are four Ashen Idols scattered around. It's highly advisable for the player to strive in keeping at least four Smelter Wedges at all times, even if it means leaving one (or maybe more) Ashen Idols intact while traversing Brume Tower. These four Ashen Idols should be destroyed prior to the fight or they will prove to be a large problem by healing Raime throughout the fight.

The NPCs available for this fight will more likely than not give Raime a higher fighting advantage by providing him with a defense boost for each phantom summoned rather than helping in doing damage to him, so they probably will not be helpful for this encounter.

It is possible to buff once inside the arena, meaning the Iron Warriors will not be an issue while buffing.

Raime takes low damage from Lightning attacks, but lightning-imbued weapons will still do decent damage to him provided they can deal considerable base Physical damage.

Raime is dangerous, even against a player wielding a shield. He will hit hard and fast, meaning stamina will be difficult to keep up, even with high stability. Since he mostly deals Fire and Physical damage, a Phoenix Parma or a Gyrm Greatshield will work well, as they can block most of the damage he will output, though the stamina drain will remain an issue.

His most often used combo at the first phase of the fight is performing two quick slashes with his straight sword followed by a wide slash from his ultra greatsword, either left-to-right or right-to-left, depending on the player's position. However, he can often chain this combo with a fourth attack as well. The player must be prepared to either block or roll after striking a hit at Raime after he has finished a combo, and never get greedy in attacking him more than once (or twice, depending on the weapon used), as he's prone to unleash his 270° evading attack at that moment.

Every now and then he'll perform a downward smash with his ultra greatsword and won't chain any more attacks, providing an excellent opportunity to attack him.

The fireballs from one of his special attacks at the second phase of the fight can be avoided by either blocking them with a shield, rolling through them, getting far away from Raime until they disappear, or, if the player is skilled enough, walk between them through their circling animation.

At this phase, the player would be wise in luring Raime into performing his slow Fire/Dark energy-projecting swipe constantly and roll through it, allowing them to score a free hit each time.

The player must be wary when Raime buffs his greatsword with both Fire and Dark. Dark damage will still inflict heavy damage and pass through shields even if the player is well equipped against fire. Having some sort of Dark Defense, like the Dark Quartz Ring, will help alleviate the extra dark damage Raime deals when he switches movesets. The Dispelling Ring+1 (also found in Brume Tower) works exceptionally well, as it provides defense against both Fire and Dark. Another option is to infuse a fully upgraded Gyrm Greatshield with Dark, even if it means sacrificing a bit of Physical and Fire defenses.

Due to Raime's resistances to almost all forms of elemental attacks, infused weapons such as Fire, Magic, Lightning, etc. will deal less damage than a fully upgraded non-infused weapon, so the player may opt in removing their preferred weapons' infusions if the fight proves to be too difficult. A good alternative is to temporarily change the weapon's infusion to Raw, which draws out a weapon's best possible Physical damage.

Once Raime has buffed his ultra greatsword (left hand), his right hand weapon disappears. For melee characters, it is highly-advisable to focus all attacks and evasive rolls on his unarmed hand. This spot is beyond the reach of most of his attacks. Likewise, the 270 degree swing can be reasonably avoided by rolling left, towards the unarmed hand then rolling back towards it once behind Raime.

If fighting Raime during the second phase, it is advisable to lure him onto the edges of the boss area. Rolling towards the unarmed hand will dodge most of his attacks. Likewise, Raime's Fire Orb attacks can be avoided altogether by running straight towards the other end of the boss area. It should be noted that this is only effective if the Fire Orb attacks are telegraphed immediately.

Steelheart Ellie and Carhillion of the Fold can be summoned for this battle. Ellie's sign is right next to the nearby bonfire, while Carhillion's sign is in front of the fog gate.

Fume Knight's greatsword covered in ash, where it stays until the player approaches it.

The Fume Knight prepares to fight the player. 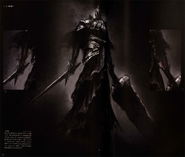