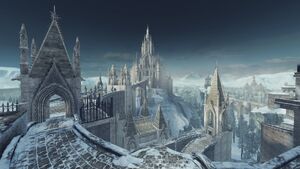 "My dear lord, a most true king. It was with his magnificent soul that he built Eleum Loyce... and contained the spread of chaos. But the Chaos would not be sated, and the king gave his own soul."
— Alsanna, Silent Oracle

Frozen Eleum Loyce is a location in Dark Souls II: Crown of the Ivory King.

Eleum Loyce lies in a large, snow covered valley. Tall pine trees grow among the scattered architecture. A citadel stands at the heart, atop a large outcropping of rock with numerous sharp turrets.

Eleum Loyce was a northern kingdom ruled by the Ivory King, a high ranking Forossan knight. The proud king was said to be ever-merciful, and devoted himself to the protection of his land.

At an unknown point, an ancient Chaos was discovered deep below the land. In an attempt to appease the raging flame, the Ivory King built a great cathedral at its mouth and the oracle of Eleum Loyce, Alsanna, prayed in silent vigilance. The attempt was unsuccessful and the flames still raged.

The king ordered the construction of the Garrison Ward, great protective wall, to confine the encroaching Chaos. Eleum Knights and golems were posted throughout the garrison to lead the advance on the swollen flame on the king's orders. With his throne upon the very mouth of Chaos, Eleum Loyce served as the first line of defense should the Chaos be unleashed.

Some attempts were made to combat the Chaos. The Knights of Loyce, led by Sir Fabian, were devoted guardians of the land. They delved valiantly into the depths of Chaos to exterminate the terrible things that dwelled there, but not one of the knights returned. Eventually, the Ivory King sensed the degradation of his soul and left Eleum Loyce without a word, leaving everything to Alsanna. He traveled deep into the Chaos until he was devoured by the flames.

At some point after the King's departure, the ivory gates of the city were flung open, and the land grew cold and lifeless. The few knights and golems that survived remain dutifully on guard, awaiting the call of their master.

The portal to Eleum Loyce
Add a photo to this gallery
Retrieved from "https://darksouls.fandom.com/wiki/Frozen_Eleum_Loyce?oldid=328887"
Community content is available under CC-BY-SA unless otherwise noted.