The Four Kings are found in the Abyss, accessed through New Londo Ruins. The player must first acquire the Key to the Seal from Ingward to drain the water from the ruins, as well as the Covenant of Artorias, a ring obtained from Great Grey Wolf Sif, to safely enter their battle arena.

The Four Kings were once great leaders of New Londo, and, in recognition of their foresight, Gwyn granted them their ranks and apportioned fragments of a Lord Soul discovered from the First Flame.[1][2] When the Four Kings were seduced by evil, their knights became Darkwraiths,[3] users of the art of Lifedrain.[4] In an effort to contain the threat they posed, New Londo was flooded,[5] trapping the Four Kings and the Darkwraiths in the Abyss, and sacrificing the city of New Londo and the countless lives therein.[6]

Summon signs are most commonly found at the beginning of the New Londo Ruins, before crossing the bridges. Some can also be found right before the boss door.

Witch Beatrice's summon sign can be found hidden around a corner just before crossing the short bridge to the Fog Door, but only if you have already summoned her for the Moonlight Butterfly fight. It may prove more than useful if you are a light build.

Two wide sweeping slashes with the King's sword. May occasionally stop after one attack. These have excellent tracking and are quite damaging to health should a critical hit land. Stamina is largely drained when blocking both consecutively. They can be rolled under, and can be sidestepped away from without taking damage.

Powerful vertical slash. Does not track, however, blocking is not recommended, as massive damage to the stamina bar is guaranteed.

Single powerful straight thrust with the Four King's Sword. It has the longest reach of all melee attacks and deals massive damage when absorbed head on. This attack is only triggered when the player is at a distance and cannot be strafed; although it has poor tracking and can be dodged.

Two diagonal slashes with the Sword; may take a fair amount of stamina to block. May stop after one attack.

Wrath of the Kings[]

Extremely powerful, large area-of-effect attack in which the King will spin around, covering himself with his left "wing" and emanate a purple aura. Blocking is most successful when using a high stability shield with good magic reduction. Otherwise, players should release their lock and run away when the King begins his attack.

The King will fire off six energy shots that home in on the player. These are much quicker than Homing Abyss Arrow, but they also have much weaker homing capabilities, allowing the player to easily roll or move away when they approach. Getting hit by multiple shots will deal immense damage.

The King will fire off a slow moving, large, purple projectile that has high tracking capability and powerful magic damage. It cannot be evaded and may only be blocked by a high stability shield with high magic resistance; which will likely drain the entire stamina bar, but may also reduce the damage. The only way to avoid this attack is to outrun it until the projectile disappears. A new king might spawn within that time period.

This is a Humanity stealing grab attack, and, like all grab attacks, it is unblockable. Its animation is similar to Wrath of the Kings: the King will spin around and pause, holding its wing/arm in preparation while emanating a colorless aura. If the player is slow to react, his forward grabbing dash will be inescapable. Counter-intuitively, it can be avoided by moving closer to the attacking king before they begin their lunge. In extreme proximity the attack will simply go over the player's head. This attack can be fatal if the player is not using armor with high magic defense. Unlike other grab attacks, the King can still be damaged by aiding phantoms as a player is drained; however, this will only deal damage to the Four Kings' collective health bar rather than the individual King. 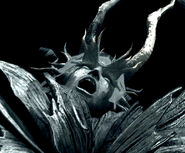 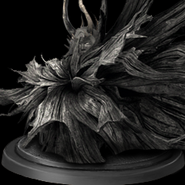 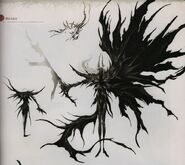