Forossa is a land to the distant east of Drangleic and home to the order of the Lion Knights, a once-mighty order of warriors known for their heavy armor and nimble two-handed swordplay techniques.[1] These warriors were also considered "a motley crew of rabid fighters", but even so seemed to avoid Vengarl of Forossa, such was his fame as a deadly warrior.[2] The Lion Knights were devoted to Faraam, God of War, and their armor was blessed by the god himself.[1] It is unknown if Faraam was revered outside of Forossa.

Leading Forossan warriors into battle were great sages bestowed the title of "Northwarder". They earned their title through completing a great journey of hardship, after which they would be worshiped as oracles of the war gods.[3] Eventually Forossa fell apart due to a prolonged conflict with its neighbors. Many citizens became bandits in order to survive, as Forossa became lawless after the kingdom fell to war.[4] The remaining knights became mercenaries. An unnamed but powerful explosive used in Black Firebombs was developed in Forossa.[5]

In Drangleic it was recognized as land fallen to war.[4] However, during the times of Lothric kingdom it's rather described as destroyed. Armor of Forossa Lion Knights is known to survive its homeland destruction and to be mentioned in numerous legends, alongside with names of those who are said to have gone beyond death.[6] It likely refers to survivors of Forossa fall. 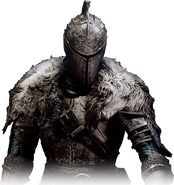 The Bearer of the Curse equipped with the Faraam Set.
Add a photo to this gallery

Retrieved from "https://darksouls.fandom.com/wiki/Forossa?oldid=324999"
Community content is available under CC-BY-SA unless otherwise noted.