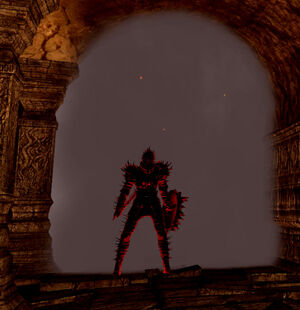 Fog Doors, also known as Fog Walls, are found throughout the world of Dark Souls.

Fog Doors act as a barrier between certain areas and are often found before boss encounters. They are activated after choosing to "traverse the white light".

Before boss encounters it is impossible to use them in the opposite direction. One exception is the first encounter with Seath, in The Duke's Archives. A player can use the Homeward Bone or the Homeward miracle to escape if they have realized they are unprepared for the boss encounters. Fog Doors will disappear once the boss is vanquished.

When being invaded, Fog Doors appear in the general vicinity to limit the staging area. Players cannot dispel invader-activated fog doors by walking through them or otherwise interacting with them and are deactivated when it is a failed invasion or the death of the player or the invader occurs.

Retrieved from "https://darksouls.fandom.com/wiki/Fog_Door?oldid=324127"
Community content is available under CC-BY-SA unless otherwise noted.