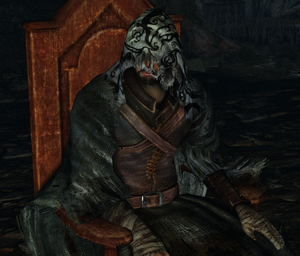 Felkin the Outcast is a sorcerer who has devoted himself to the Dark and the powers of Hexes. He can be found before the first bonfire in Huntsman's Copse, and will train in, and sell to the player, Hexes if they have an Intelligence and Faith level of 8 or above. If the player does not have the required stats, he will dismiss them and request to be left alone. If the player speaks to him with Intelligence and Faith levels at 20, he will give you the Hexer's Set, and the Sunset Staff. He will still speak to the player if the player re-specs with a Soul Vessel.

Felkin has a prominent stammer. He has little patience for those who don't have the talent for Hexes, and will dismiss any who do not display such. However, should someone even hint at skill in hex magic, he will give them everything they need to embrace the Dark.

Strangely enough, if Felkin is attacked, rather than casting hexes at the player, he will actually cast pyromancies with his Sunset Staff.

Felkin also uses the Chaos Rapier, and Chaos Shield, should he choose to fight the player in melee combat.

Felkin, at one point, was an aspiring sorcerer. He traveled to the most renowned magical schools across the land to learn Sorceries, Miracles, and Pyromancies, but none of them interested him. He was on the verge of giving up his life of sorcery, when the Dark called to him, and he took up Hex magic. Ever since then, he has been deeply enthralled in the Dark and its teachings, and travels the land sharing his knowledge with anyone who could practice it.

Artwork
Add a photo to this gallery

Retrieved from "https://darksouls.fandom.com/wiki/Felkin_the_Outcast?oldid=330300"
Community content is available under CC-BY-SA unless otherwise noted.