Farron Followers are members of the Undead Legion of Farron, as the Abyss Watchers are, but unlike them, they wield other weapons and attack with a different combat style, favoring to use throwing spears or short swords to fight. Just as the Abyss Watchers do, they will fight with each other whenever one of them is corrupted by the Abyss.

There are four different types of Farron Followers:

The most common Follower. This enemy wields the Follower Javelin and will spend most of their time throwing javelins at the player from range. Their high aggro range means that unless the player is aware of their presence, the first warning that a Lancer nearby is a spear striking them.

This Follower wields a Follower Javelin and a Follower Shield. They will generally run into melee range to attack the player with their spear, using their shield to block incoming attacks.

This enemy wields a Follower Torch, using the weapon art to breath fire at the player in arcs. He can also scream to alert other Followers once he is alerted to the player's presence.

This Follower wields a Follower Torch and a Follower Sabre. He will not use his torch's skill but will attack with fast and fluid combos using the sabre.

Farron Followers can be found in multiple locations throughout the Painted World of Ariandel. They are initially encountered in the Snowfield area shortly after arriving in Ariandel, and later in larger numbers in the Snowy Mountain Pass.

Farron Followers are members of the Undead Legion of Farron, subservient to the Abyss Watchers. As indicated by the descriptions of their armor and weapons, they were put in charge of killing any member of the Undead Legion who showed traces of being corrupted by the Abyss. They were silent assassins who would hunt down their prey unceasingly.

Once the Abyss Watchers linked the First Flame and became Lords of Cinder, the Followers no longer had any purpose for being. And as Farron Keep became a poison swamp afterward, they further lost the place that they called home, and so they drifted aimlessly until they hollowed and ended up in the Painted World of Ariandel. It is presumably for this reason that, once the Abyss Watchers revived and returned to Farron, they no longer had Followers to cull the Abyss-tainted warriors from their ranks, forcing them to do so themselves.

Care must be taken when engaging the Farron Followers, as while they are not very strong individually, they tend to swarm and overwhelm the player with their numbers. It is important to try to single out weak or vulnerable Followers and kill them quickly, in order to avoid being overpowered by the others. All Followers have very little Poise and little health, and as such they will typically fall in a few hits and can be stun-locked.

The Lancers can be defeated before aggro-ing the others with good ranged attacks, such as with a bow. Their projectiles are not hard to dodge, but their greatest danger lies in hitting the player with their spears in the midst of combat with other Followers, staggering them at inopportune times. They also pose very little threat at close range, and it can be relatively easy to roll through a projectile and then bear down on the Lancer before he can ready another one.

Knights pose a danger more with their shields than with their attacks. Their shields can deflect a player's attacks if using smaller weapons like Straight Swords, leaving them wide open for retaliation. This can prove problematic when embroiled in melee combat with different Follower types, as swinging wildly can cause the player's strikes to deflect at inconvenient moments. It is best to either avoid directly engaging them until other serious threats have been dealt with, or eliminate them immediately with a guard break followed by a riposte.

Torchmen can deal a tremendous amount of damage if they can get within range to use their torches. They will generally breathe flames in streamed arcs, weaving back and forth in an attempt to hit the player multiple times in a single attack. If threatened at melee range, they will often breathe fire while backing away, in an attempt to avoid being caught by the player's attacks. The best way to deal with Torchmen is to roll through their initial fire stream and hit them with a rolling attack to stagger them and interrupt them, and then continue attacking until they are dead.

Swordsmen will move aggressively on the player and chain together multiple slashes with their sabres. The best way to eliminate them is to block their attacks with a shield, and then strike when they are recovering. 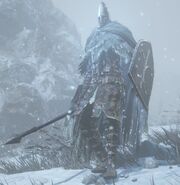 Close-up
Add a photo to this gallery

Retrieved from "https://darksouls.fandom.com/wiki/Farron_Follower?oldid=312406"
Community content is available under CC-BY-SA unless otherwise noted.