The Falchion is a curved sword in Dark Souls II.

Each slash of a curved sword does less damage than a straight sword, but can deal a series of hits in flowing succession.

The sharp blade is effective at causing bleeding, but is soon dulled. Beware when facing rock-solid foes.

The scimitar's bigger cousin, the falchion is often considered a step-up from the smaller curved sword.

Having a better base damage and almost identical scaling, the falchion will always outdamage the scimitar, at the minor cost of being one unit heavier.

The major differentiation between the two lies in the one-handed attacks. In particular, the scimitar has a much faster recovery with the one hand light attack versus the falchion's; for strong attacks, the falchion will hit twice while the scimitar thrice. In that sense, the falchion favors heavier damage per strike, while scimitar relies more on combo to deal damage.

The falchion also has innate bleed, making it somewhat a decent candidate for bleed infusion; though its moveset limits the weapon's combo ability.

Like all curved swords, the falchion's attacks can somewhat be redirected, especially noting the one-hand and two-hand's second heavy attack. Light attacks for both stances are still direct-able, but limited mostly to the direction of the slashes. 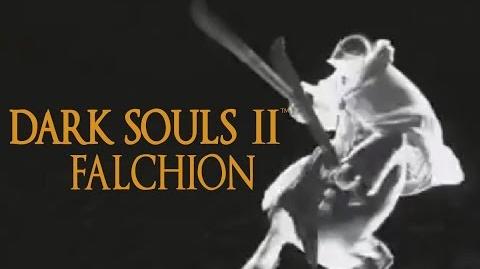 Retrieved from "https://darksouls.fandom.com/wiki/Falchion_(Dark_Souls_II)?oldid=310248"
Community content is available under CC-BY-SA unless otherwise noted.