The Emerald Herald is a character in Dark Souls II. She is voiced by Ruth Negga.

Much like the Maiden in Black from Demon's Souls, the Emerald Herald serves as the player's means of leveling up, replacing the bonfires of Dark Souls in this respect.

She gives the player an Estus Flask upon introducing herself. Bringing her Estus Flask Shards will increase the total amount of charges that the Flask can hold.

She gives the player the Aged Feather when spoken to upon arrival in Dragon Aerie.

The Emerald Herald's real name is Shanalotte, a name given to her by the dragons. She was created specifically to break the undead curse, but her creators failed and she did not come out as intended. Despite this, she guides undead towards the Throne of Want, waiting for a powerful undead that might defeat the Four Old Ones, succeed Vendrick and end the undead curse.

She will next appear in the Undead Crypt, where Vendrick now wanders aimlessly. After the Bearer of the Curse has claimed the king's ring, she will direct them to follow the mark of the king and journey east, and warn them that if they continue on this path, they too will one day walk these same grounds, without really knowing why.

Shanalotte will once again appear once the Bearer of the Curse has reached the Dragon Aerie. Here, she will reveal that it was her manifestations that led them here, and has been guiding them all along. She directs the Bearer to the top of the aerie, where the Ancient Dragon awaits them.

Shanalotte will appear one final time when the Bearer of the Curse is approaching the Throne of Want. She will tell the Bearer of her origins and her true name. She will warn them that Nashandra, desiring the power of the Flame and the Great Soul will come after them, but that they must persist nonetheless.

Should the Bearer of the Curse choose to claim the throne, Shanalotte will narrate their ascent, explaining that linking the flame will cause souls to flourish anew but that the events that have transpired will play out all over again, and that it is the Bearer's choice whether to embrace or renounce this.

Royal Sorcerer Navlaan tells the player many people believe the Emerald Herald is the last firekeeper. Navlaan will also say she is sometimes known as the "Muse".

If the player lowers her health down to half, she will refuse to talk and will simply stand still. Resting at a bonfire will reset her health to normal, but she will still ignore the player until they have spoken with Cromwell the Pardoner.

She drops the Aged Feather if killed.

"I request a trial of the one who bears the curse" 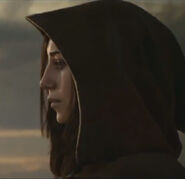 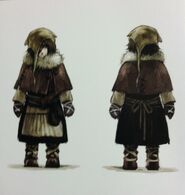 Artwork of Shanalotte as a child

Artwork of Shanalotte as a child