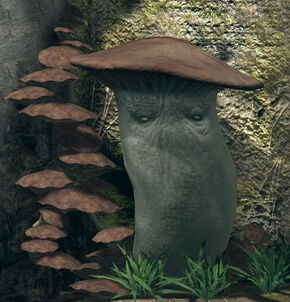 "Well, look at this one. From what far-away age hast thou come? Thy scent is very human, indeed..."
— Elizabeth

Elizabeth is a character and merchant in the Dark Souls Artorias of the Abyss DLC, and is encountered in the Oolacile Sanctuary. She is the only source of Elizabeth's Mushroom, apart from one you can pickup in the forest. Elizabeth is voiced by Joanna Wake.

She is a giant mushroom, with a white stalk, and light-red cap. In this sense she looks quite similar to the Mushroom Parents in Darkroot Garden and The Great Hollow, however, she is armless and immobile.

Elizabeth is the guardian of the Oolacile Sanctuary and is the godmother of Princess Dusk.

By the events of Dark Souls II, Elizabeth is revered as a saint and legends tell that Saint Elizabeth was a beautiful woman of great virtue, who devoted her life to healing the ailments of the needy by concocting medicine and potions.[1] Little more is known about her, apart from the fact that her unique medicines were still widely used long after her time. Her name was passed through verbal tradition from her time to the time of Drangleic.[2][3][4]

By the time of Dark Souls III, what looks like her corpse can be found in a cave in Farron Keep, by a chest with the Antiquated Set and Golden Scroll. How she got there or whether or not that truly is her is unknown, but the items found around her heavily imply it is indeed her corpse.

She is associated to the creation of troches and a specially treated dried mushroom.

If not already purchased from Dusk of Oolacile.