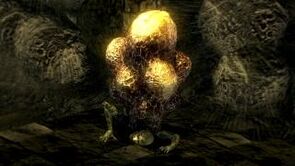 "...There is nothing to say to you... Except... If you lay a hand on the Fair Lady, you should be prepared to face my wrath."
— Eingyi

Eingyi is a character in Dark Souls. Heavily burdened with infected eggs, he is a pyromancer who is devoted to serving Quelaag's Sister. He is voiced by Peter Marinker, who also voiced Darkstalker Kaathe and Kingseeker Frampt.

Found at the end of a corridor behind the illusory wall in Quelaag's Domain.

Eingyi is initially mistrustful of the player. However, if the player contracts the Egghead status, Eingyi will form a kinship with them. When spoken to afterward, Eingyi offers the player a Pyromancy Flame if they have an Intelligence stat of 11 or above. This also unlocks the ability for Eingyi to sell Egg Vermifuges and the Poison Mist and Toxic Mist Pyromancies.

Should the player kill Quelaag's Sister, Eingyi becomes enraged and will turn hostile.

Eingyi was originally a pyromancer from the Great Swamp and was cast out due to the perverse nature of his Pyromancies.[1] He later became afflicted with the unknown blight that plagued the followers of the Chaos Witches. Because of this, Quelaag's Sister felt pity and sucked out the blight pus from them. This action caused her to become gravely ill, strengthening the loyalty and adoration of her adherents.

Although Eingyi is devoted to Quelaag's Sister, he cannot speak her language; everything he knows about her and her past is through observation and extrapolation.

He created the Poison Mist and Toxic Mist Pyromancies.

In terms of combat, Eingyi is identical to the other egg-bearers: he will feebly swing with his arms, attack with a Vile Maggot from his eggs, and, upon death, unleash a handful of the same maggots from his eggs to attack the player. Eingyi also has a chance of infecting the player.

Area-of-effect attacks make short work of both him and his maggots.