They appear to be prone humans with a large clump of eggs attached to their backs.

Most Egg Burdened, including Eingyi, are passive and all serve the "Fair Lady". Eingyi appears to be the most devout of all the Egg Burdened.

When hostile they attempt to grab the player. If successful, a maggot will burst forth from one of their eggs and latch onto the player, infecting them with a parasitic egg. After a short time, the "Egghead" status effect will take hold.

Killing them will burst the eggs, releasing five Vile Maggots that can spray red fluid which can also infect the player.

The Egghead status effect will prevent the player from wearing a helmet, as well as decrease their fire resistance, replace their kick with an "egg attack", and decrease the amount of souls gained by 50%. The only means of a cure is the Egg Vermifuge.

The Egg Burdened are easily avoided thanks to their slow speed. This may be the best course of action, as their drops are hardly worth risking gaining the Poisoned or Egghead status.

Intentionally infecting oneself with Egghead status, then speaking to Eingyi, creates additional dialogue, as well as pyromancies for sale. 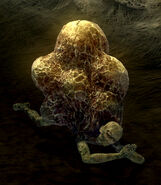 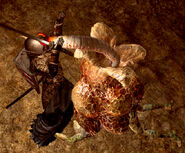 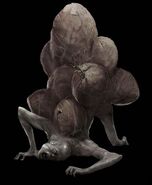