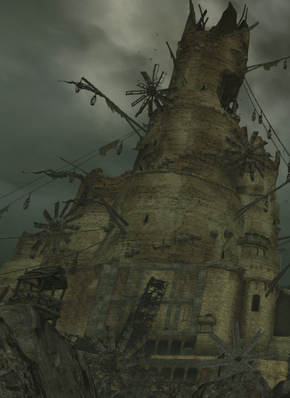 For the Dark Souls III location, see The Dreg Heap.

The Earthen Peak is a location in Dark Souls II.

Earthen Peak is situated inside a large, decaying fortress covered with windmills. The area features many enemies and environmental traps that cause poison and bleeding.

The huge windmill next to the Central Earthen Peak bonfire can be destroyed by setting it on fire with a lit torch. This will drain the poison pool in the boss arena of Mytha, the Baneful Queen as well as other poison pools throughout the area, including the pool near the first bonfire in Harvest Valley.