"For a very long time, I was trapped within the Crystal Golem. From my home I was taken, and banish'd to a plane of distortion. It was there, that thou came to my rescue. Long after I had relinquished all hope. So gleeful was I, my faith reneweth."
— Dusk of Oolacile

Dusk of Oolacile, also known as Princess Dusk,[1] is a character and merchant in Dark Souls. She is voiced by Emma Pierson, who also voiced Anastacia of Astora.

Dusk is an entirely optional character; she sells the player sorceries from Oolacile as a reward for rescuing her. These include: Hidden Body, Cast Light and Chameleon. Depending on the player's playstyle, it may be well worth the trouble of rescuing her.

While it is not necessary to the main storyline to interact with her, it is necessary if the player wishes to experience the events that take place in the Artorias of the Abyss DLC.

Artorias of the Abyss[]

Dusk's summon sign vanishes from Darkroot Basin after the Chosen Undead obtains the Broken Pendant. After being pulled into a nearby dark void and transported to the past land of Oolacile, the Chosen Undead discovers that Dusk has been abducted by Manus, Father of the Abyss.

Dusk is from the ancient and long-dead land of Oolacile, which practiced magic alien even to the magic realm of Vinheim. It is unknown how she was trapped in the Golem in the first place, but it is clear that she is in the wrong era. 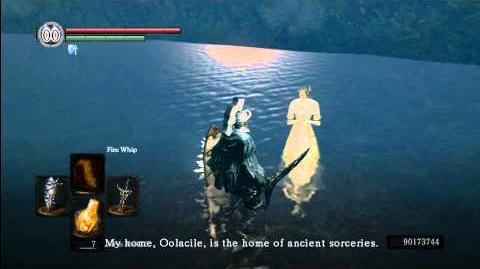 Dusk in the Chasm of the Abyss