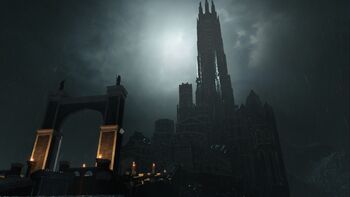 Drangleic Castle is a location in Dark Souls II.

Drangleic Castle was the central point and seat of power of Drangleic during the empire's height. King Vendrick and his queen, Nashandra, ruled Drangleic from here until the outbreak of the undead curse.

The King's Passage is an adjoining area of Drangleic Castle. When the undead curse started to become uncontrollable, King Vendrick fled through this passage and never returned. At one time, it served as a trial for aspiring heroes, now it holds only death as the Looking Glass Knight is tasked with destroying all who attempt to gain passage.

The Throne of Want is an area separated from Drangleic Castle by a King's Gate. It houses the true throne of Drangleic, and all those who gain the right to sit upon it know true power.

The entrance to Drangleic Castle.

The Emerald Herald waits before the castle.

Two Primal Knights waiting to challenge those seeking entrance.
Add a photo to this gallery
Retrieved from "https://darksouls.fandom.com/wiki/Drangleic_Castle?oldid=323778"
Community content is available under CC-BY-SA unless otherwise noted.