"In Drangleic, the flow of time is convoluted...Things shift and waver, twist and turn..."
— Saulden

Drangleic is a location in Dark Souls II.

Drangleic is the kingdom where the events of Dark Souls II take place. The protagonist will have to venture into this treacherous land in order to find a cure for their curse. Like Boletaria in Demon's Souls and Lordran in Dark Souls, Drangleic was once a powerful and prosperous land which fell into decadence and damnation after a series of unfortunate events.

At the dawn of Drangleic, the great King Vendrick built the kingdom on the souls of the four great ones. With the help of his elder brother Aldia, Vendrick made Drangleic into a prosperous and powerful nation. Vendrick was eventually approached by Nashandra, who claimed to be a visitor from a far-away land. Nashandra warned Vendrick of the looming threat of the Giants, and convinced him to invade their lands before they could strike at him. Vendrick did so, and used the knowledge that he gained from the captive Giants who were brought back to his kingdom to manipulate souls on an unprecedented level, allowing him to create the Golems, which he would use to further develop his kingdom.

Vendrick took Nashandra as his queen, and side-by-side they ushered in an era of peace.

The peace was soon broken however by the arrival of the Giants, who had come to avenge their captive and now dead brethren. The Giants laid siege to Drangleic in a war that would last for generations, but they would finally be defeated when an unknown hero defeated the Giant Lord. The Giants retreated, crossing the sea to return home, but the damage was already done, and Drangleic was reduced to ruins.

To make matters worse, the undead curse began breaking out. Vendrick and Aldia dedicated themselves to attempting to solve the curse. As a delaying measure to buy them more time, Vendrick tasked the Flexile Sentry with taking the undead to a far away land. The pair made great strides in understanding the nature of the undead, but were ultimately unable to find a cure. Eventually, the two brothers fell out, and Aldia was exiled to a mansion in the east, where he would continue his own grim research.

Vendrick eventually found out the truth about his queen; that she was a child of the Father of the Abyss, and that she had been manipulating him all along. Broken, and now afflicted with the curse himself, Vendrick took his loyal right hand Velstadt, the Royal Aegis and a contingent of knights and left to begin his exile in the Undead Crypt. Before doing so, he put certain safeguards into place to ensure that Nashandra would never claim the Throne of Want, denying her the First Flame and the Great Soul.

Vendrick eventually hollowed in the crypt, as the once-great Drangleic continued to decay. 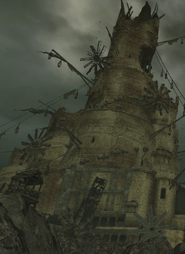 The Dragon's Nest by Tom Zhao 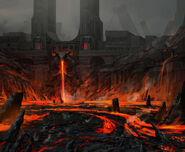 The Iron Factory by Tom Zhao