The Drakeblood Greatsword is a greatsword in Dark Souls II: Crown of the Sunken King.

Greatsword wielded by the Drakeblood Knights, led by the honorable Sir Yorgh. The insignia chiseled upon its hilt symbolizes dragon's blood.

To the Drakeblood Knights, fresh dragon blood was sacrosanct. They believed that by obtaining it, they could achieve a true understanding of life, transcending their own banal existence.

Located on a corpse in the Dragon's Sanctum. The corpse is found shortly after the Lair of the Imperfect bonfire, on the small piece of dry land, past an elevator leading to the first bonfire of Shulva.

The Drakeblood Greatsword is a well-balanced greatsword; it has relatively low requirements, boasts a very versatile moveset of slash and thrust attacks, and is one of the lighter greatswords found in the game.

Although most of its damage draws from the player's Dexterity pool, the magic and lightning damage also allow players to deal "chip damage" through an enemy's guard, making it a suitable choice against defensive opponents. It is also fully-buffable with spells and resins, and the very high counterstrength allows the weapon to deal astronomical damage when paired with the Old Leo Ring.

The only two drawbacks are it can only be pillaged from a corpse in the Crown of the Sunken King expansion, and it requires petrified dragon bones in order to be upgraded. 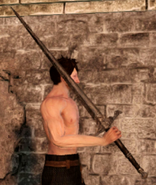 In-game
Add a photo to this gallery
Retrieved from "https://darksouls.fandom.com/wiki/Drakeblood_Greatsword?oldid=329110"
Community content is available under CC-BY-SA unless otherwise noted.