Edit
watch 08:00
'Dark Souls' Lore: Ornstein and Smough
Do you like this video?
Play Sound

Ornstein was one of Gwyn's Four Knights, alongside Gough, Artorias and Ciaran. He was believed to be their captain.[1]

It's possible to summon Solaire of Astora to help in the fight. His summon sign can be found on top of a small platform connected to the stairs to the left, when facing the fog door (the platform below the archer knight).

If he starts the encounter at full health, Solaire can generally solo one of the bosses, as long as he's not attacked by the other (i.e., if the player keeps the other boss busy). This can make it harder to ensure a specific kill order (necessary to determine the final loot, as described below), as there is no way for the player to tell Solaire to stop attacking a specific boss.

The player must fight both at the same time. When one is killed, the other absorbs some of his power, receiving an HP, damage, and resistance boost, and healing back to 100%. He will also take on a physical characteristic of his fallen comrade: Ornstein grows in size while Smough is imbued with lightning.

Having a summoned phantom can make the fight significantly easier, as it allows the bosses to be fought separately. Note, however, that there's no advantage in damaging both bosses during the first phase (as mentioned above, the surviving boss' HP goes back to 100% when the second phase begins). The role of the second player is simply to keep one of the bosses busy while the other is killed.

When fighting alone, one of the safest strategies is to kite the bosses around the outside of the room, keeping both in view and using the pillars to block their charging attacks while whittling them down with hit-and-run tactics. As Ornstein is the faster of the pair, he will usually be able to catch up to the player quickly. The player can then choose to focus down Ornstein while Smough attempts to navigate around the pillars, or double back to Smough after getting Ornstein away from him and using the short window of separation to attack him before Ornstein returns.

Ornstein's moveset consists largely of dashing and thrusting attacks, meaning that dodging to his sides is more effective than attempting to roll away. He is faster and more nimble though, so he can also be harder to hit. As well, he can issue Lightning blasts from his spear at range, making him a serious threat at any distance.

Smough is the tougher of the two, his hammer is capable of dealing tremendous damage should it connect. Because the hitbox is centered on the head of the hammer, it is best to dodge towards or away from him, as getting within the arc of his hammer's horizontal swings can cause them to miss entirely. Beware, as he also has a dangerous charge attack that he can use if the player is not within striking distance of his hammer.

Killing Ornstein first is generally regarded as making the encounter easier to win, since Smough has more weaknesses and is slower than his partner in the second phase. However, killing Smough first will yield the Leo Ring, which is a useful ring for certain builds.

For melee builds, using a weapon with good reach (such as a spear, halberd or a sword with a fast thrusting attack) will make it significantly easier to hit the bosses when they are near a pillar. Note that both bosses can hit through the pillars with some of their attacks.

Ranged builds using the pillars to control the movement of the bosses should note that not all pillars are the same height; some will block projectiles while others will not.

If Ornstein is defeated first, Smough will gain Lightning attacks with his hammer, though his moveset does not change appreciably. He is still quite slow and his attacks are still horizontally focused, so dodging in and out is still a sound strategy. Be wary of his Banzai Drop in this phase, as it creates a Lightning explosion upon impact, dealing damage in a large area around him.

If Smough is defeated first, Ornstein will increase greatly in size, drastically changing his moveset in the process. The key to defeating Super Ornstein is to keep in mind that while he has absorbed Smough's strengths, he has also inherited his weaknesses: Super Ornstein is much slower, and has trouble navigating around pillars. Like other large bosses, he also has trouble hitting enemies that are directly under him, though his Lightning Banzai Drop helps to counteract this. Try to stay extremely close to Super Ornstein and attack his legs, dodging out when he performs the Lightning Banzai Drop.

Ornstein swings his spear up to four times in a row. This attack can be blocked, and generally offers a good chance to counter-attack.

Ornstein jumps up, and then either stabs at the player, or smashes his spear into the ground where the player is standing. Both deal the same amount of damage, and can be blocked.

Ornstein glides towards the player, and then stabs with his spear. The attack can be blocked or dodged, and a counterattack is possible to achieve. Note that this attack can (rarely) cause Ornstein to move through a pillar.

Rare attack that is identical to Charging Spear, except Ornstein imbues his spear with lightning before charging.

Only used if Smough was killed first. Ornstein jumps up, pauses mid-air, then falls onto the ground, causing a wide lightning field created from the point of impact. This cannot be fully blocked, and can only be dodged by keeping one's distance. Smough's distinct laughter can be heard during this attack.

Ornstein uses his weapon's power to shoot a small burst of lightning at the player. This attack is rarely used.

Ornstein charges up a lightning bolt that he fires at the player. This Lightning Bolt is unusually slow once fired and has strong homing capabilities.

In Ornstein's large form, he will charge his spear with lightning, and then lunge at the player in a quick stabbing motion. If this attack connects, Ornstein will raise the player and release the charged lightning, dealing huge amounts of damage.

Smough charges at the player with his hammer, then swings it upwards diagonally when he reaches the player. This deals heavy damage, especially when in lightning form. It can be avoided by running directly away or with the right dodging speed. Blocking will break the player's guard if they are using a shield of inadequate stability. While pillars will block Smough's movement, the hammer itself will go through the pillar.

Smough swings his weapon. It is possible to roll under this attack and start attacking before Smough has time to recover. Blocking this attack may use a large amount of stamina. May follow up with a second swing.

Smough slowly raises his weapon and then hammers the ground in front of him. This attack can go through pillars. May follow up with a swing.

Smough jumps into the air and then hammers the ground as close to the player as he can get. This can be avoided by rolling in any direction while Smough is airborne.

Smough jumps into the air and then crashes into the ground below. Smough takes a while to recover after using this attack. When in his more powerful form, there is a lightning area of effect upon landing. The only way to fully avoid the lightning damage is to roll when Smough lands on the floor. It can also be partially blocked with a shield. 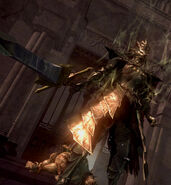 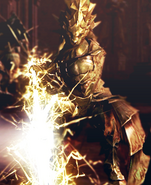 The battle with the Dragonslayer and Executioner.