Not much is known about the world at this time; only that the world was shrouded by fog, filled with grey crags and arch-trees, and that the immortal Everlasting Dragons held dominion over the land.

With the birth of the First Flame - the Advent of Fire - the Lords challenged the Dragons for dominion of the world. During the war, Gwyn, the Lord of Sunlight used his powerful bolts, peeling their stone scales; the Witch of Izalith and her Daughters of Chaos wove great firestorms; Nito, the First of the Dead unleashed a miasma of death and disease; and Seath the Scaleless, who sought the immortal scales of the dragons, betrayed his own kind.[2]

In the aftermath of the war, The Age of Fire came about, bringing an age of sunlight and prosperity. While the Everlasting Dragons appear to be all but extinct, the race has many descendants throughout the world, some greater and some lesser, with varying degrees of similarity to their progenitors.

From what can be glimpsed in the opening, the Everlasting Dragons were towering beings with a skin covered both by stone scales and bristly dark fur. Their head sported two straight horns and a mouth bearing two rows of sharp teeth on both jaws. Their back ended in a long and heavy tail but they were still able to fly thanks to their wings, leathery and clawed like the ones of a bat. Appropriately for creatures that lived in a world of fog and penumbra, their two eyes had vertical slotted pupils (this kind of eye is the symbol of both the Path of the Dragon and the Dragon Remnants). Aside from these reptilian features, the Everlasting Dragons' body was a lot less beastly than that of their descendant and kin: their arms didn't end in claws but in four-digited prehensile hands while their torso, broader at the shoulders and thinner at the hips, was almost humanoid in appearance.

Seath and the Stone Dragon prove that these beings were capable of higher reasoning and could understand other species' language to at least some degree, via their known contributions to the world (the former, Seath, being the founder of soul sorcery).

The Dragons' iconic characteristic, their stone scales, was implied to have a strong connection with their own form, based on the description of the Dragon Scale item. The exact truth of this, however, is undetermined.

Throughout the series as a whole, draconian qualities and covenants are seen by several characters or are mentioned in item descriptions as being believed to be a way for individuals to transcend their current form.

It is still a mystery if the Everlasting Dragons' destructive breath is true fire (as suggested by the Dragon Head Stone) or a flame with arcane properties (like Kalameet's); however Kalameet's flames are at least partially Dark in regards to game mechanics.

The Chosen Undead may encounter many distant descendants and remnants of the Dragons throughout Lordran and Oolacile:

The Hellkite Dragon encountered in Undead Burg is actually a Drake. Drakes are seen as undeveloped imitators of the dragons, but are likely their distant kin.[3] Wyverns may also be of similar origin to the Hellkite Dragon and are found in the Valley of Drakes.

The area boss of the Depths is the Gaping Dragon, a distant, warped descendant of the Everlasting Dragons.[4]

Undead Dragons, scattered throughout the land, are corpses of the Ancient Dragons that maintain some spark of life within their rotten form and can be occasionally stumbled upon as minibosses.

Crossbreed Priscilla of the Painted World of Ariamis is the result of the interbred of a Dragon and a God.[7]

Seath the Scaleless, the albino dragon, allied with Lord Gwyn and turned upon the Ancient Dragons: for this he was awarded Dukedom and given a fragment of a great soul.[8]

One-eyed Black Dragon Kalameet may be encountered as an optional boss in the Royal Wood area of Oolacile and is supposedly the last of the Ancient Dragons.[9][10]

The Guardian Dragon residing in a cage in Aldia's Keep, is one of Aldia's creations and guards the way to the Dragon Aerie which is filled with the Dragon's kin. Despite its name, this creature is a wyvern (it has two legs and two wings) and its features are both avian and draconic. Being a creation of Aldia, it is possible that the latter interbred the last surviving drakes with some giant avian creatures in order to create a self-sustaining new race of Dragons.

The corpse of a Dragon can be found in the area in which The Duke's Dear Freja is fought, as well as within the Dragon Memories.

The Ancient Dragon residing in the Dragon Shrine is said by the Emerald Herald to have watched over the world for "aeons". However, the veracity of this is doubtful, and he may have been resurrected by Lord Aldia than a survivor from the War of Fire, since Aldia attempted to recreate the dragons using giant souls. The former is far more likely as when the Ancient Dragon is slain, the Bearer of the Curse receives a Giant Soul.

Sinh, the Slumbering Dragon is the only true Dragon encountered in Dark Souls II. He was worshiped in the city of Shulva and was awoken by Sir Yorgh, thus leading to his and the city’s demise.

Imperfects are eyeless horrors with a giant humanoid mouth and the ability to breath dark spheres. While their appearance is far-removed from a dragon, they drop dragon-related items. The meaning of this is unknown.

Oceiros, the Consumed King was formerly the King of Lothric but became obsessed with Seath the Scaleless' work and sought to become more powerful using his royal blood. He discovered research made by Logan, who in turn was inspired by Seath. Much like Logan, Oceiros was driven insane by the work of the paledrake and somehow transformed into a malformed abomination reminiscent to that of a dragon.

Archdragon Peak is a location accessed through the 'path of the dragon' gesture found behind the location where Oceiros is fought. The enemies there are adherents to the Path of the Dragon, most likely based on the covenant from Dark Souls. Various sizes of these man-serpent hybrids appear, wielding various weapons such as axes on chains, daggers and spears. The Ancient Wyvern is also fought here.

Company Captain Yorshka seems to be a dragon crossbreed similar to Priscilla. She has scale-like markings around her eyes, and a tail not unlike that of a dragon's.

The Wretches found in Irithyll dungeon are a twisted hybrid of a human and dragon who were left in the dungeon to rot, possibly due to being failed experiments.

The young painter found in the library in the Painted World of Ariandel may be a crossbreed as well, as she appears to have scales on her feet and face, although she is lacking a tail.

The Nameless King is referenced to have sided with the Dragons and is speculated to be the first-born son of Gwyn, indicated by several descriptions on weapons and his boss soul. He is referenced as a dragon-slaying god of war who sacrificed everything to side with the Dragons, and Gwyn's first-born son is said to have been stripped of his stature as punishment for his foolishness and effectively removed from history as a result of that. When encountered, he is riding a Stormdrake, named King of the Storm.

Darkeater Midir is the only remaining archdragon encountered in Dark Souls III who is still alive. Raised by the Gods of Lordran themselves to combat the growing Abyss, Midir's everlasting battle against the darkness has taken its toll on him, and he is slowly being consumed by the dark's influence. Fearing that the darkness within him may drive him mad, the Ashen One is tasked by Shira to put him down before he loses himself.

Seath the Scaleless - Traitor to the Ancient Dragons.

The Gaping Dragon - a malformed descendant of the Ancient Dragons.

The Stone Dragon - Descendant of the Ancient Dragons. 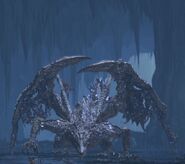