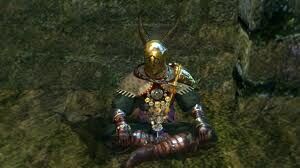 Domhnall of Zena is a merchant in Dark Souls. He is voiced by Matt Morgan, who also voiced the Crestfallen Warrior.

Domhnall is an eccentric peddler who sells rare crystallized equipment and boss armor, but only after the player defeats the corresponding boss.

Domhnall is the only character from Zena that the player encounters, and very little is known about him aside from his fascination with trinkets and oddities. His wares include the weapons wielded by the crystal hollows in The Duke's Archives, suggesting that he may have previously visited or fled from there, or that he is capable of crystallization.

Domhnall attacks much like any other NPC. Fighting him at the Firelink Shrine can be dangerous with the cliffs on either side. However, the terrain can be exploited by kicking or forcing him off a ledge.