Hailing from the land of Jugo, these beguiling fiends are skilled with fire magic and are noted for using their feminine wiles to lower an enemy's guard before attacking. Their reason for being at Earthen Peak is unknown. Their visages hidden alluringly behind veils, they are deceptively dangerous and should not be underestimated. Mytha forbids any face more beautiful than her own from being seen, and the Sorceresses wear their veils to avert the mistress's wrath. Their beauty is poisonous.

Desert Sorceresses are fragile, with low HP and average physical defense, but they do catastrophically heavy damage with most of their attacks and have relatively high (compared to their physical defenses) elemental defense. Their primary offense centers around the use of pyromancies, several of which are unique. They carry a catalyst that resembles a hand mirror.

Players should avoid fighting Desert Sorceresses that are near other enemies, unless one is confident in their crowd control abilities. They are often encountered along with other enemies, who draw the player's attention while the Desert Sorceress bombards them with her spells from range. If possible, try to aggro other enemies out of range of the Sorceress' spells and defeating them before focusing on her.

Alone, they are not much of a threat, so long as one has a shield with high Fire resistance, such as the Gyrm Greatshield.

The Sorceresses have no Poise, and are thus susceptible to stun-locking, including using bows. Be careful when using slower weapons, as some swing slowly enough to give the Sorceress a chance to cast a pyromancy before being hit again.

If one decides to take a more direct approach, one must be cautious of their pyromancy attacks, as they can deal tremendous damage, especially in NG+ and beyond. The Desert Sorceresses have a fairly long time delay between casting spells, so try to bait out a spell and then dodge it before charging in.

They are vulnerable to Poison, so it is quite an easy task to take them out from afar using Poison Arrows. Alternatively, the ones in Earthen Peak can also be lured into destroying the poison-filled jars that are scattered across the area.

Scattering Flame
The Sorceress launches a volley of five fireballs into the air, which then arc downward, hitting the ground and exploding. The blasts are quite large and the damage from multiple flames can quickly prove fatal if a player is unfortunate enough to be in the area of multiple blasts. Fortunately, the flames explode on impact, which means they frequently fail to reach their full potential due to hitting the ceiling or walls. Their high arc and wide spread also allows players to step between the fireballs, or simply run under them harmlessly.

Lingering Flame
The Sorceress launches, via a blown kiss, a mid-sized fireball that lingers in one spot for several seconds after flying out. The fireball will explode on impact if something touches it whilst active or the spell's duration expires. The blast this fireball has is enormous, and is quite capable of knocking characters to the ground or instantly killing those with poor Fire resistance and/or low Vigor.

Combustion
Waving her catalyst cross-wise (right to left from the player's perspective), the Sorceress unleashes a searing cloud of flames. The damage is low as far as the Sorceress' pyromancies go and only deals damage at melee range, but it has a very short telegraph and lingers for a short period of time.

Grab
Desert Sorceresses are capable of a grab attack, similar to the Darkwraiths from Dark Souls. This attack is telegraphed by the Sorceress crossing her arms and giving a mocking chuckle animation, before attempting what looks like a slap. If players opt to retreat out of range, the Sorceress may walk for a short distance before attempting the grab, however it has poor tracking and can be sidestepped. If successful, the Sorceress will kiss the player, performing a grab rather similar to the Dark Hand attack, which does enormous damage, enough to kill a relatively low-Vigor character instantly. This attack cannot be reduced by physical or elemental defenses.

Catalyst Strike
At close range, Desert Sorceresses may attempt to use their catalyst to strike the player. Catalyst attacks are telegraphed by the Sorceress bringing it back to her right (the player's left) before swinging it in a fast three-hit combo, with the final attack being delayed slightly. The catalyst attack can be parried. 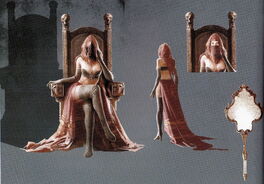 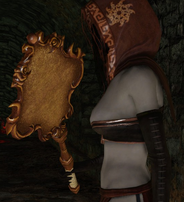 Close-up of the Mirror Catalyst 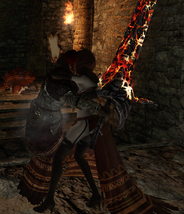 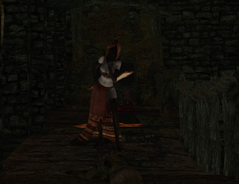 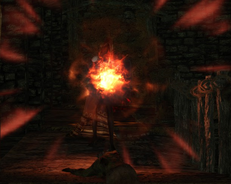 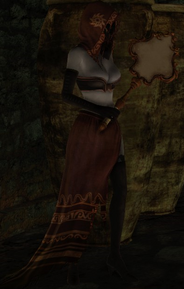 Side view of a Sorceress 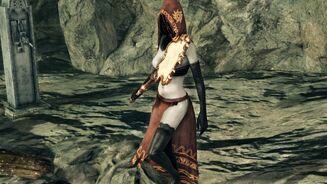 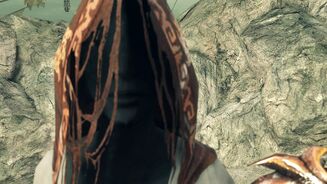 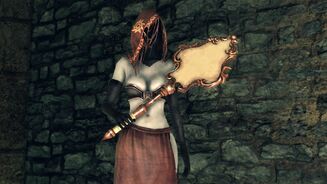 Add a photo to this gallery
Retrieved from "https://darksouls.fandom.com/wiki/Desert_Sorceress?oldid=329414"
Community content is available under CC-BY-SA unless otherwise noted.