Soul of the Demon Prince

Demon in Pain and Demon from Below redirect here.

The Demon Prince is a boss in Dark Souls III: The Ringed City.

The Demon Prince, after his defeat to Lorian, retreated beneath the earth and lost the memory of the flame that burned within him, marking the end of demonkind.[1]

The fight starts with two active bosses, the Demon in Pain and the Demon from Below. Both periodically ignite and extinguish, using different abilities depending on which of the two states they're in. After killing them, the demon who died last sprouts wings and becomes the Demon Prince. The Demon Prince uses different attacks and gains access either to a laser beam or fire orbs, depending on which of the two initial demons he grew out of.

Found in The Dreg Heap, at the bottom of the pit located at the end of Within the Earthen Peak Ruins.

The Chaos Flame, like the First Flame that it was unable to replace, is capable of being rekindled by a champion demon of vast power.[2] Such a so-called "prince" went to face Lorian, eldest son of the Lothric royal family, and was defeated in combat.[3] But the race of demons shares memory with each other, and those that remembered the power and determination of the Demon Prince share in this essence, so that even the last demon alive can rekindle the Chaos Flame.[2]

By the final end of the world, reality has partially collapsed onto itself, gathering all lands onto one point of convergence. At the bottom of a large tree rest two demons, the last demons by that time, and the last one to survive shall be reborn as the Demon Prince.

Demon in Pain and Demon from Below[edit | edit source]

During the first phase, the key to surviving is exploiting the difference between the Extinguished and Ignited states of the two demons. While Extinguished, they are not very mobile and use limited-range and slow-moving Toxic breath attacks, only resorting to easily dodged melee attacks when there is a nearby threat. Out-ranging an Extinguished demon or staying outside of its attack arcs will make it easy to slay. An Ignited demon, on the other hand, will aggressively pursue the player with melee attacks, but will not use breath attacks at all. The demons can spend several seconds to power up and shift from an Extinguished to an Ignited state, or perform a slow but powerful two-handed fiery slam that snuffs out their flame and reverts from an Ignited to an Extinguished state while simultaneously rendering them helpless for several seconds after.

The key to defeating the first phase is to split the demons up while also keeping both in view at all times. While an Extinguished demon is not a major threat, its breath attacks can provide supporting fire for an Ignited demon, creating inconvenient moments where the player may be unable to capitalize on openings in an Ignited demon's defenses. Watching for the breath attacks will allow the player to reposition to easily avoid it while still being able to comfortably fight the other demon. If both demons are Ignited, the safe move is to play passively and keep both of them in view while trying to attack only when both are not able to immediately retaliate; kite them around the arena until one of them performs the fiery slam to revert to an Extinguished demon, then choose a target to attack.

Inflicting enough Poise damage to a demon will stagger it, opening it up for a visceral attack. This can be done regardless of the state of the demon, and is a good way to rack up strong damage.

Regardless of which demon was killed last, the Demon Prince is a very aggressive enemy that employs powerful claw combos, aerial bombardments and dive attacks, and a grab attack where they will pick up the player and toss them, dealing heavy damage. Getting within its claw arcs or behind it is the best way to avoid damage, though beware that it is extremely mobile so be ready to chase it down. As with the first phase, inflicting enough Poise damage will allow the player to perform a visceral attack for tremendous damage, and the powerful charged attacks for either form of the Demon Prince can also be interrupted with enough Poise damage (separate from the primary stagger, and a visceral cannot be taken upon interruption unless it is from the primary stagger).

Promotional screenshot
Add a photo to this gallery 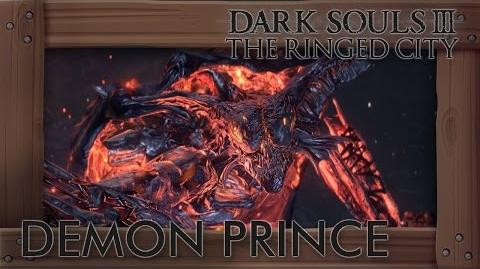 Retrieved from "https://darksouls.fandom.com/wiki/Demon_Prince?oldid=338187"
Community content is available under CC-BY-SA unless otherwise noted.