-
The Demon's Catalyst is a catalyst in Dark Souls.

Note: The translation of this item was incorrect[1] - see footnote.

Demon catalyst formed from Izalith molten rock. Can be used as fire weapon. The Demon Firesage was the first demon, and the last master of the original fire arts before the Witch of Izalith was engulfed by Chaos, creating pyromancy.

Dropped by the Demon Firesage upon defeat.

The Demon's Catalyst is the second-heaviest catalyst in the game to the Manus Catalyst, which weighs one unit more. It has one of the lowest potential magic adjusts of any catalyst, being the lowest until 41 Intelligence where it surpasses the Oolacile Ivory Catalyst and Oolacile Catalyst. It trades these things for being a powerful melee weapon, dealing Fire and Thrust damage with its strong attack. The high strength and dexterity scaling will have a powerful effect on dark sorceries, as the physical damage dealt by those sorceries are boosted by those stats. Overall the Demon's Catalyst should be considered as a weapon that is effective with dark sorceries, but is not as effective with regular sorceries. 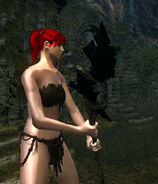 Retrieved from "https://darksouls.fandom.com/wiki/Demon%27s_Catalyst?oldid=338024"
Community content is available under CC-BY-SA unless otherwise noted.