For the boss fight, see Deacons of the Deep.

In time, those dedicated to sealing away the horrors of the Deep succumbed to their very power. It seems that neither tending to the flame, nor the faith, could save them.[1]

Devoted followers of Pontiff Sulyvahn and Lord Aldrich, the deacons act as both priests and warriors for the Church of the Deep. Despite their frail appearance, they are powerful mages and can overwhelm opponents with their pyromancies.

There are three variants:

Deacons are weak opponents and easily defeated with a few standard attacks. Their threat comes from the speed at which they cast their spells and how they often appear in large groups that can overwhelm the player with a constant barrage of fireballs. It is recommended to either thin them out with ranged attacks from a distance or use hit and run tactics to eliminate them one by one. 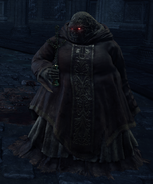 A Deacon casting a spell. 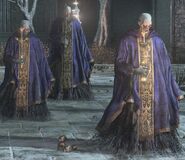 Deacons as they appear in Irithyll and Anor Londo. 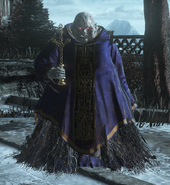 Retrieved from "https://darksouls.fandom.com/wiki/Deacon?oldid=329543"
Community content is available under CC-BY-SA unless otherwise noted.