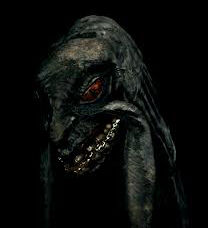 "Greetings, Undead warrior. I am the primordial serpent Darkstalker Kaathe. I can guide thee, and illuminate the truth. Undead Warrior, conqueror of the Four Kings; is this not your wish? To know the truth of men, and the Undead?"
— Darkstalker Kaathe

Darkstalker Kaathe is a character in Dark Souls. He is a primordial serpent with the primary goal of bringing about the Age of Dark. He is voiced by Peter Marinker, who also voiced Kingseeker Frampt and Eingyi.

Darkstalker Kaathe will appear in the Abyss, after defeating the Four Kings, if the player has not already placed the Lordvessel through Kingseeker Frampt.

Darkstalker Kaathe greets the Chosen Undead and tells his side of the story: that the player is not to renew the Age of Fire by rekindling the First Flame, but is in fact the descendant of the one who possessed the "Dark Soul", and shall be responsible for bringing about the Age of Dark. Kaathe will transport the player to Firelink Altar in order to place the Lordvessel, and then instructs the player to collect the other Lord Souls in order to confront Gwyn, Lord of Cinder.

Kaathe can initiate players into the Darkwraith covenant.

Placing the Lordvessel while under the care of either of the serpents will result in the loss of the other. Frampt provides the service of breaking down larger Titanite pieces and can get rid of items in exchange for souls, while Kaathe provides Cracked Red Eye Orbs to the player while a member of his covenant.