"If thou art a true disciple of the Dark Sun, cast aside thine ire, hear the voice of mineself, Gwyndolin, and kneel before me."
— Dark Sun Gwyndolin

Dark Sun Gwyndolin is the leader of the Blades of the Darkmoon and an optional boss in Dark Souls. He is voiced by Harry Lister Smith, who also voiced Prince Lothric in Dark Souls III.

Dark Sun Gwyndolin guards the honorary tomb of Lord Gwyn in Anor Londo. The tomb can be found by using the spiraling staircase on the rotating bridge while the bridge is in its lowest position and descending to the second accessible bonfire. If the player wears the Darkmoon Seance Ring in this location, Gwyn's statue will vanish and Gwyndolin's fog door will be revealed. The player can then either pledge allegiance to him and his Blades of the Darkmoon or dare to trespass the fog door behind of which he dwells in, thus commencing the boss battle.

If the player does not yet have the Darkmoon Seance Ring, they can kill Gwynevere instead, which at that moment will be revealed to be just an illusion set up by Gwyndolin himself. The entrance to Gwyndolin's boss room will be accessible at the same aforementioned location.

Gwyndolin initiates players into the Blade of the Darkmoon covenant. He accepts Souvenirs of Reprisal in exchange for increasing the player's rank in the covenant.

Gwyndolin was the last-born son of Lord Gwyn and the only true remaining deity to guard Anor Londo.[1] He was raised as a daughter due to his strong affiliation with the moon's power.[2] He uses the illusion of the princess Gwynevere to help hide his repulsive appearance.[3]

By the events of Dark Souls III, Gwyndolin has become the main figure of authority and worship in Anor Londo, taking his father's title as King of the Gods.[4] As well as continuing to watch over those who link the Fire, Gwyndolin appeared to be tracking down descendants of the gods who fled Anor Londo millenia prior and bringing them back to Irithyll.[5] The exact reason as to why he was doing this is unknown, though it could be that he was trying to ensure that the power of the gods continued to live on.

He ruled alongside his apparent sister, Yorshka, a young crossbreed girl. Although the exact nature of their familial ties is unclear, it is known that Gwyndolin thought very highly of her as he provided her with his own personal Chime as well as her name.[6]

A former denizen of the Painted World, Sulyvahn would later inflitrate the city of Irithyll and the Darkmoon system in order to usurp it from within, after having earned the favour of the god. It is highly implied that Sulyvahn worked his way up the power system in Irithyll, all the while corrupting the clergy and enforcing his position among the highest ranks of the Way of White.[7][8][9]

Gwyndolin would later become stricken with an illness so severe that he could no longer lead his own Covenant or the city. As he was too sick to lead his own Covenant, its leadership passed to Yorshka, who was shortly thereafter imprisoned by Sulyvahn who took complete control of the city and claimed the title of Pontiff.[10] The God of the Darkmoon was then imprisoned himself, inside the ruins of the old cathedral of Anor Londo.[11]

After Aldrich was revived as a Lord of Cinder, he quickly became disillusioned with his throne and journeyed to Irithyll in order to consume the imprisoned god.[12][13] Once he arrived, he began to slowly consume Gwyndolin, who was most likely powerless to fight back, both physically and spiritually, gaining access to his knowledge of Priscilla and Nito while he was dreaming.[14][15] However, the Unkindled arrived halfway through consumption and Aldrich took control of Gwyndolin's body/power in order to defend himself as he was vulnerable while consuming the god. Gwyndolin was released from his gruesome fate when the Unkindled slew the Lord of Cinder, ending the god's torment and finally allowing him to die.[16]

He is not a very difficult boss if the player has decent dodging skills. Of his three attacks, two can be avoided by hiding behind pillars, while the last one is more powerful and fast (he will tend to use the Sphere Shot after Orb Spread if the player is hiding behind pillars). The main issue in this fight is reaching him, as he will teleport away when the player approaches (equipping the Ring of Fog may increase the time available to attack before he teleports), meaning that the best time to run up to him is when he is just finishing off his Arrow Spread, as he takes a few moments to recover. Gwyndolin can still be damaged while he is in his teleporting animation and for a split second after actually moving, so it is possible to deal considerable damage at that moment.

Both the Orb and Arrow Spread attacks are avoidable by hiding behind one of the pillars on either side of the corridor. The Sphere Shot, on the other hand, will go through walls, inflicting full damage if not blocked or avoided. The Orb Spread and Sphere Shot are Magic-based, though, so a shield that can block 100% physical damage and has good Magic resistance, like the Crest Shield, is recommended for this fight.

While devastating, both the Sphere Shot and Arrow Spread attacks have no tracking whatsoever and are easily avoided simply by running diagonally. If a player does not want to risk it too much, a good strategy to catch up to him is by moving from pillar to pillar until they are about two pillars away from Gwyndolin and then wait until he shoots his Arrow Spread. This attack can consist of two-to-four arrow barrages. Wait until he finishes the second one and go for him, if he shoots any subsequent arrows, dodge them by running diagonally.

Alternatively, once Gwyndolin teleports the first time upon entering the tomb, it is possible to move closer to him to a point just outside his aggro range; then, by equipping the Hawk Ring and using the Dragonslayer Greatbow, the player can easily defeat him from range without him retaliating.

Gwyndolin will slightly raise up and shoot multiple arrows at the Player. Blockable as they do not use much stamina. Alternatively, the Player can stand behind the pillars so that the arrows hit the pillar instead. From New Game+++, if all the arrows hit a non-blocking player, death is certain.

Gwyndolin will charge up his catalyst and shoot a cluster of homing blue orbs at the Player. Deals heavy damage if they connect. Recommended action is to hide behind the pillars as the orbs cannot go through them, or roll under it.

Gwyndolin will charge up his catalyst and shoot out a huge magic sphere which travels at great speed. Possible to dodge by rolling to the sides or directly under it or blocking with a good magic shield. The sphere can pass through the pillars, so hiding behind them is not recommended. 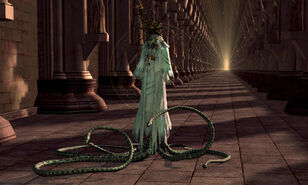 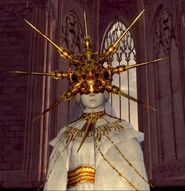 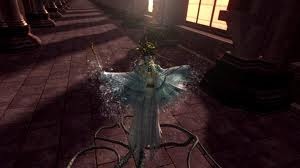 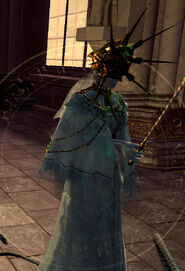 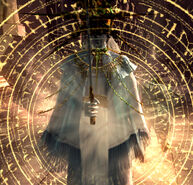 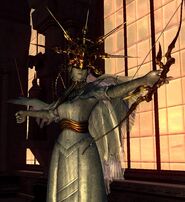 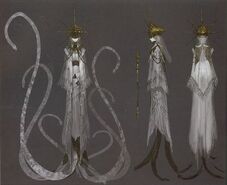 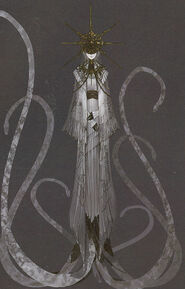 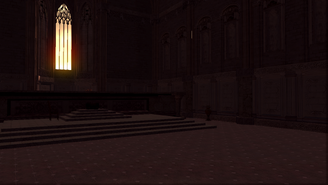 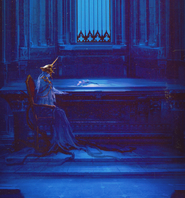 Scan from the official art book. 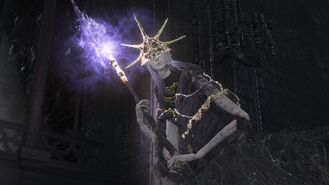 Gwyndolin being controlled by Alrich. 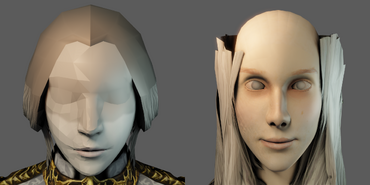 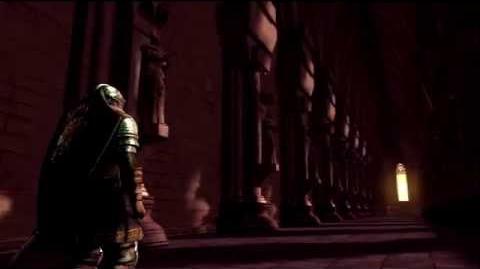 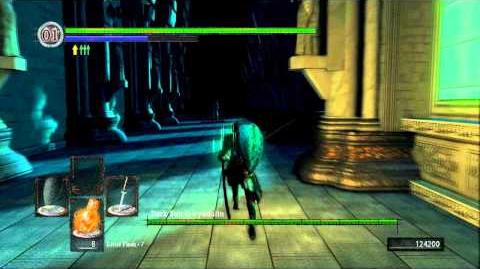 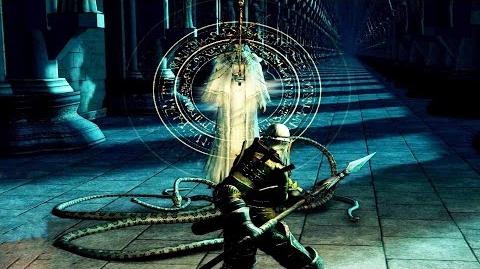