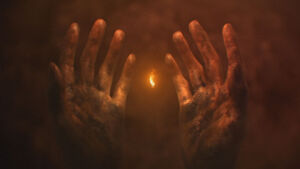 This page is about the concept. For the game, see Dark Souls.

The Dark Soul is the soul of the Furtive Pygmy, and one of the Souls of Lords in Dark Souls. It is the namesake of the Dark Souls series.

The Dark Soul, one of the unique Lord Souls, was claimed by the Furtive Pygmy, the ancestor of the Chosen Undead and Humanity.[1] In the introduction to the first Dark Souls, it is depicted as a small, reddish flame like a candle. However, this conflicts with later descriptions.

Due to it being a Lord Soul, it could imbue its bearer with the ability to channel different iterations of Disparity, in this case being the power of Dark. Any fragment of the Dark Soul that separates from the original can be fueled by emotions and willpower, and increase its usable power, making it potentially the mightiest of the four Lord Souls.

Most notable of its functions is the power to animate life and raise sentient beings from the Abyss, for the Dark Soul is the only Lord Soul which is intrinsically tied to the Abyss, as well as all other forms of life barring the Everlasting Dragons. Chief among these is the Human race, but lesser creatures are said to have also risen from the Dark, such as the White-faced Locust.[2][3] The Dark Soul is also linked to the Dark Hand, and by extension, the art of Lifedrain. This is the legendary power of the fabled Dark Lord, used to gain humanity from others. The Darkwraiths used this power to steal Humanity from their victims.[4][5]

In terms of passive uses, bearers or close descendants of the true Dark Soul via its Blood - such as the Pygmies - have increased longevity, though it does not seem to truly render mortal bearers immune to age and death. It is discovered that the Dark Soul carries the power necessary to create a painted world, and the painter of the next incarnation uses this "pigment" to paint a cold dark world on a canvas to escape the current painted world, once two Unkindled (Elfriede & the Ashen One) arrive and ignite the flame that burns its rot away.[6]

During the advent of Fire, the concept of Disparity came into existence, and with it the Dark and the Light. From the Dark came beings (Hollows) who claimed souls near the First Flame; 4 of these became the Lords who claimed the mightiest and most brilliant of souls.[7] While the other three "Lords" found larger souls, there was a fourth, a lowly and forgotten being known only the Furtive Pygmy. His soul was the Dark Soul.

Using the Dark Soul, the Pygmy created black sprites of darkness called Humanity, who was given to his descendants, who became the humans. These dark-souled beings risen from the dark were called Humans, each bore fragments of the Dark Soul. When the other Lords took to fighting the Everlasting Dragons, they conscripted the Humans, who forged quasi-living arms and armor in the Abyss. But the Humans were betrayed and their contributions unrecorded, and upon them the Gods placed a seal of fire, later coming to be known as the Darksign.[8][9]

Most Humans would turn to serve the Gods, while a small group relocated to the Ringed City, gifted to them by the "Great Lord" Gwyn. He also gave them his youngest daughter, Filianore, and promised her that he would come for her one day.[10] Those "pygmies" that retreated to the Ringed City brought the Dark Soul with them, with the lords of the city separating its original essence and keeping it safe from harm, and putting a spell on Filianore to keep the city immune to the erosion of time. While they put on a show of service to Gwyn, they still despised him and the Gods, and subtly defied them in some ways.[11] Those that did not leave were enslaved by the Gods, which eventually became reverence, or were buried.

Near the final end of the Age of Fire, the slave knight called Gael traveled to the Ringed City, seeking the Pygmy Lords to gain their blood. The blood of the Dark Soul was intended to be used to paint a new Painted World, but to Gael's shock, Filianore's spell was broken and the Pygmy Lords were aged to the point that their blood did not flow, for it was dried. Even though he knew he had not the strength to survive bearing it, Gael slew the Pygmy Lords and drank from their wounds, absorbing the Dark Soul.[12][13] It imbued him with a dark miasma and warped his mind, but in the end he was successful, slain by the Ashen One to extract the soul's blood. The current state of the Dark Soul is unknown, but given the eternal nature of Lord Souls, it is unlikely that it was truly destroyed.