The Dark Hand is a gauntlet in Dark Souls. It is a versatile weapon that can also function as a shield.

The Darkwraiths, incited by Kaathe, use the power of the dark soul to absorb humanity, an art shared by this weapon, which also acts as a special shield. The ancients, particularly, could sap the humanity of even a replete saint in the blink of an eye.

The Dark Hand is either granted by Kaathe to the player upon joining the Darkwraith Covenant, or it can be found off the Darkwraith enemies as a drop.

As a shield, the Dark Hand has an 80% damage reduction from all damage types, is able to parry, is tied with the Small Leather Shield for lowest weight in the game, and one of the highest lightning damage reductions of all shields. This makes the Dark Hand a very well rounded Small Shield alternative. It also has the highest durability available and is hidden when not actively blocking, helping to offset its very low stability negative.

As a weapon, the Dark Hand's special right handed strong attack is the only action capable of stealing liquid humanity from NPCs and other players. How much it steals is dependent on the rank the player has progressed in the Darkwraith Covenant, as listed:

Note: Humanity stolen is per attack. Multiple attacks will yield more humanity if the victim has any left.

The special attack has a very long windup time and a small hitbox, so one must choose wisely when deciding when to use it. Dark Hand users may not steal more humanity than is available on their target; for example, if a Darkwraith +3 were to use the grab on someone with 8 humanity, they'd only steal 8 and not 10. Certain NPCs carry liquid humanity on them, and can have all their humanity stolen without becoming hostile towards the player thanks to the very low damage the Dark Hand deals to NPCs when initiating the grab move. 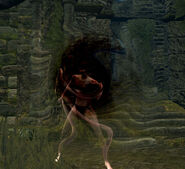 Add a photo to this gallery
Retrieved from "https://darksouls.fandom.com/wiki/Dark_Hand?oldid=327964"
Community content is available under CC-BY-SA unless otherwise noted.