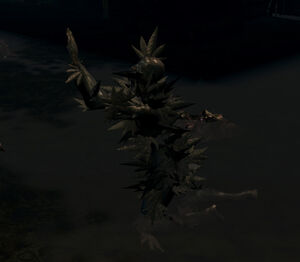 For other uses, see Curse (disambiguation).

Curse is a negative status effect in Dark Souls.

When assaulted by those who cause Curse buildup, the Curse meter gradually fills in a similar manner to that of Poison. Once filled, instant death occurs, leaving behind a statue, and the player returns to the last bonfire rested at.

The player character may become cursed during their death animation if they die of a different cause just before the Curse buildup meter fills. This is most likely to happen while fighting Seath the Scaleless, but the timing required is very specific. Wearing a regular Ring of Sacrifice in this situation has absolutely no effect as the death is retroactively considered to be death by Curse by the game.

The player's health will be reduced to half of its maximum capacity (before bonuses such as from the Ring of Favor and Protection are figured in) and it becomes impossible to kindle Bonfires or to use humanity for reverse hollowing. However, cursed players may attack the Ghosts and Banshees in the New Londo Ruins without having to use a Transient Curse.

Unlike curing most other negative status effects, Divine Blessing does not cure Curse or its buildup. Equipping a Rare Ring of Sacrifice while already cursed, then dying will not cure the cursed status either. Using a Purging Stone both cures Curse and reduces its buildup to zero. It is also possible to seek out Ingward, in the New Londo Ruins, who is able to cure Curse for the cost of one liquid humanity. Ingward will travel to Firelink Shrine after speaking to him when the Four Kings are defeated, making the curing of Curse that much easier. It is also possible to purchase the Resist Curse sorcery from Ingward. This only cures buildup, however. One can additionally raise one's humanity counter, as this moderately increases curse resistance.

Most armor sets offer very little or no Curse Resist at all, especially the Starting Armor Sets. However, as the game progresses more become available.

Light Armor Sets offer some of the best defense against Curse, most notably the Antiquated Set and the Dingy Set.

Medium Armor Sets are typically not a good choice for Curse Resist, however, the Paladin Set offers exceptional resistance to Curse.

Heavy Armor Sets offer some of the worst choices, but of them Havel's Set offers the highest Curse Resist.

Individual armor pieces that have the highest Curse Resist when fully upgraded are the Xanthous Crown, Paladin Armor and Gauntlets, and the Antiquated Skirt, totaling 226 Curse Resist.

The Bloodshield is the only shield that offers resistances to negative status effects, and is a good choice when facing enemies that inflict Curse.

Enemies that inflict Curse are encountered seldom throughout the game, but when they are, care should be taken.

Getting attacked by multiple Basilisks. 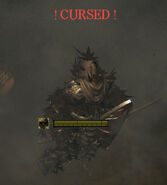