Ever since its establishment, all manner of curses have managed to seep into the Undead Settlement. The worst of them were sealed away inside a spirit tree, but eventually the curses took their toll.

This boss is a large tree with humanoid limbs, covered in pus-filled sacs. It is being worshiped by the citizens of the Undead Settlement.

Found in the Undead Settlement, at the end of a big courtyard and surrounded by a multitude of peasants.

From the Dilapidated Bridge, head into the graveyard where the Giant Archer shoots arrows; enter the house on the opposite end and climb up the stairs to the second floor. Keep following this path until reaching an L-shaped structure and turn left at the corner to find the courtyard.

The Greatwood was once a spirit tree which the residents of the Undead Settlement would use in desperation to seal away the worst of their curses. However, these curses eventually took their toll on the tree, creating this abomination.[1]

Upon entering the courtyard, the Greatwood is initially dormant at the far end of the area. Upon awakening, it will attempt to crush the player with its arms and legs whilst also leaking a poisonous liquid from its underside. It will also bombard the player with the putrid "fruits" that hang from its branches, sacks filled with decomposing corpses. All of its attacks are well-telegraphed but it and the most efficient method is dodging. Unlike other bosses, the Greatwood can only be damaged by attacking the growths on its body.

To trigger the second phase of the battle, at least one of the growths covering the boss must be destroyed, the easiest one being the growth on its belly. The hollows will attempt to distract the player but will often be killed by the boss' attacks, meaning the hollows can often be ignored in favor of attacking the growths. The boss will smash the floor, dropping the player into a new area. The player will not take any damage but any surviving hollows will perish.

During the second phase, the Greatwood becomes more aggressive and a long, white hand emerges from its front. This hand can perform a powerful grab attack so it is safer to remain at the side of the Greatwood. Some of the growths may be hard to reach with melee weapons; so, ranged attacks and spells can be effective. The boss will be stunned once with each growth destroyed, enabling the player to attack its front unmolested or target another growth.

Whilst risky and a fairly longer process, the player can continue to deal damage to the Greatwood by attacking the hand and the wound in its chest, rather than destroying the growths. 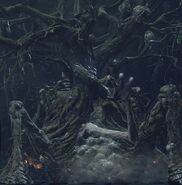 The Greatwood during the second stage of the fight.
Add a photo to this gallery 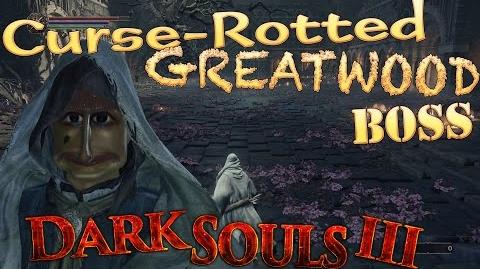 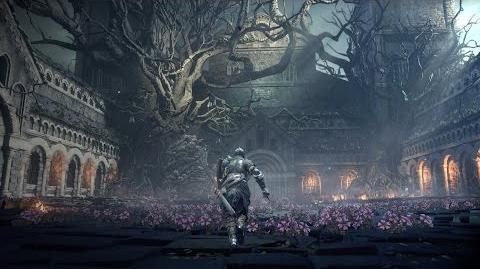 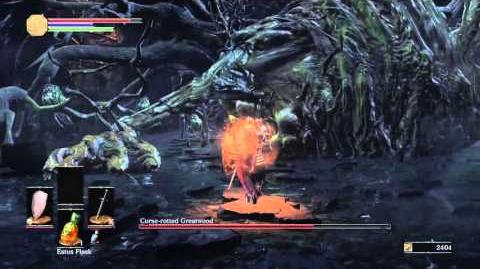 Retrieved from "https://darksouls.fandom.com/wiki/Curse-rotted_Greatwood?oldid=314260"
Community content is available under CC-BY-SA unless otherwise noted.