The Crystal Sage is a boss and later a miniboss in Dark Souls III.

The twin Crystal Sages once served as spiritual guides to the scholars of the Grand Archives, and one went on to ally with the Undead Legion.[1]

Both Sages are towering figures that have billowing, long robes that obscure most of their bodies. True to their pedigree, they wear enormous hats that obscure their faces, though they also wear bone masks that look like beaks, with glass-eyed lenses. Instead of sorcery staves, they utilize crystal spheres as catalysts (likely used similarly to crystal balls). The Legion's Sage uses a floral lavender sphere, while the Archives' Sage uses a bluish white sphere. They also wield rapiers for defense.

The preacher twins, known better as the Crystal Sages,[2] arrived in Lothric at an unknown time, along with numerous magics.[3] They were said to be the successors, or at least the spiritual successors of the legendary "Big Hat" Logan,[4] the Vinheim sorcerer who studied the paledrake, Seath the Scaleless, and his learnings, which lead to Logan's records of Crystal Sorcery, which the Sages would continue to study throughout their whole lives,[5] and it appears that they eventually set up shop at Lothric's Grand Archives.[6]

The Scholars of the Grand Archives, under the spiritual direction of the twins, maintained a dangerous store of knowledge, some of which being similar to what drove both Seath and Logan mad, forcing them to take measures such as coating their heads and clothing with wax[7] to avoid similar madness. Their favorite student during this time was a woman named Kriemhild, and they gifted her with one of their spherical catalysts, fixed to the end of a stick to create a staff.[8]

Eventually, in a pact of uncertain terms, one of the Sages joined the Undead Legion of Farron[1] to teach them sorceries, though how this affected the relationship between the twins is not made certain. As the Legion believed in speed over power, the Crystal Sage created spells that were practical and could be used relatively faster than other sorceries,[2] but required and encouraged the development of specific talent.[9] The daughter of the Legion's lead acolyte, a xanthous scholar named Heysel, appeared to have had some of her own sorceries tailored in such a way.[10][11]

The Crystal Sage spends the first half of the fight teleporting and casting spells. Its spells include Homing Soul Arrow, Heavy Soul Arrow, a homing crystal ball, a rapid fire soul dart, and a mortar-style bombardment. Once down to half health, the Sage will spawn clones each time it teleports. These clones seem to cast the same spells. The clones disappear upon taking any damage and damaging them does not affect the boss' health bar. To tell the clones apart from the boss look at the color of their spells, spells cast by the clones are blue in color whereas those cast by the boss are purple. It is not advisable to block any of the spells, as the stamina drain is large.

For melee players, running up to the sage and hitting rapidly is a good strategy. This should interrupt any spells and cause the Sage to teleport. Once the Sage gets to half health and clones, you must either take out the clones very quickly or identify the real Sage to deal damage. The clones only take a single hit to dispatch.

It is advisable for melee players to pack throwing knives, as the clones can be quickly dispatched with single knives. The Crystal Sage is also highly susceptible to bleed damage.

It is possible to stagger the sage by using a large weapon (e.g.: ultra greatswords) to stun-lock and take him out before he enters the second phase.

It is also possible to use poison or toxic against him. Usually the Storyteller's Staff can do the job easily. Simply Use the weapon art, toxic the boss and go sit at the top of the little hill at the right of the arena. Slow way to kill the boss but surely a safe approach on higher NG or when melee is a tricky approach.

As the Crystal Sage is vulnerable to parries, Sacred Flame can be used to immediately interrupt its movements. This can be particularly useful for interrupting the Sage's teleporting attempts.

Eygon of Carim: If the player speaks to Eygon in the Undead Settlement after rescuing Irina of Carim, he can be summoned for this fight. In the pillar chamber leading to the arena, his summon sign can be found behind the third pillar on the left. 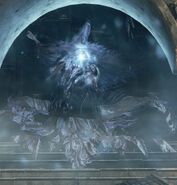 The second Crystal Sage in the Grand Archives.

Crystal Sage in the Grand Archives. Notice this version's hair. 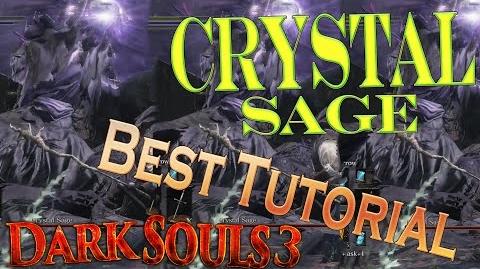 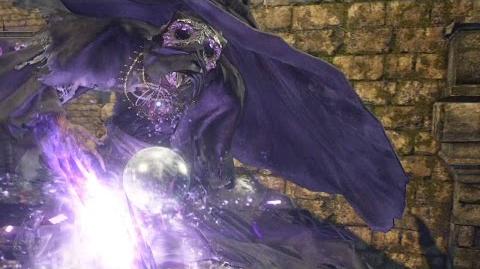 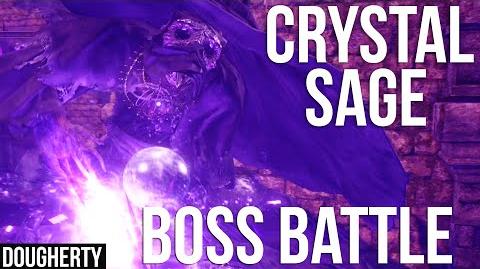 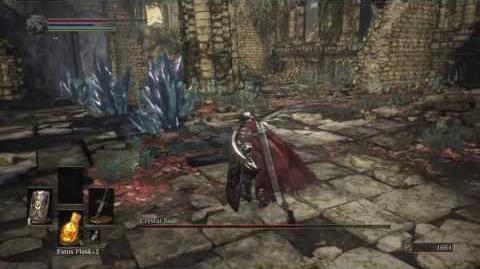 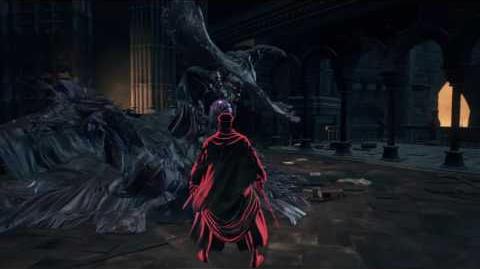 Observing one of the Crystal Sages pt 1 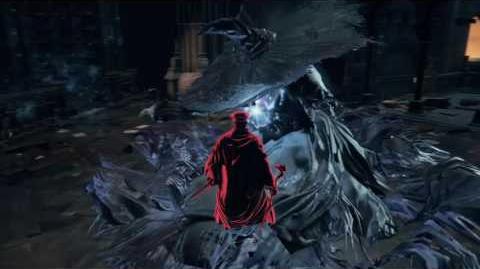 Retrieved from "https://darksouls.fandom.com/wiki/Crystal_Sage?oldid=331496"
Community content is available under CC-BY-SA unless otherwise noted.