Crow Demons, also known as Harpies and Crow People of Velka, are enemies in Dark Souls.

Crow Demons are encountered in the Painted World of Ariamis.

Crow Demons are lanky and slightly taller than the player, with pale skin and black feathers. They are a combination of a hollow's torso and legs, and a crow's dishevelled wings and head.

Crow Demons perform fairly simple attacks for the most part. However, they can fly across short distances, and are able to close gaps very quickly with a potentially fatal grab-attack. This can be easily avoided by staggering them, rolling, or by constantly moving. As soon as they have reached the height at which they dive from, they will cease to track the target's location much like throwing a Fireball or Firebomb. Try not to roll too late, as invincibility frames will not prevent being grabbed. Moving closer to them as they ready their attack will also work, as their flight angle is too high.

Crow Demons are easier engaged one by one, although certain areas make it difficult to lure a single Crow Demon. Players can manipulate the spiral staircase inside the tower where several Crow Demons spawn to force them over the edge, netting easy kills. 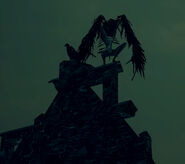