Soul of Priscilla
Priscilla's Dagger
(if tail is cut)

"Why could thou not let us be? Didst thou not see why Ariamis created this world?"
— Priscilla, the Crossbreed

Crossbreed Priscilla is an optional boss found in the Painted World of Ariamis and a character in Dark Souls. She is initially non-hostile and will ask the player to leave the world without fighting. She is voiced by Clare Corbett, who also voiced the Undead Female Merchant and Gwynevere, Princess of Sunlight.

Priscilla is a crossbreed of a dragon, possibly Seath[note 1] and either a human or a god. She has fur over most of her body, making her more similar to the true Everlasting Dragons than to Seath the Scaleless. Furthermore, she is feared and mistreated by the gods, while Seath is a Duke. Her mother - if she had one - is unknown, and it is unlikely she is the daughter of any other character who appears in the game, though many assume it's a god due to not only her size, but her revered status in the Painted World.

Priscilla wields the Lifehunt Scythe, a weapon so powerful that even the gods feared her. She was locked away in the Painted World of Ariamis, presumably to keep the real world safe from her. However, when the player reaches her, she reveals that she is well aware of how to leave the painting and simply chooses to remain. She is also initially not hostile unless provoked, and even claims the Painted World to be "peaceful" and its inhabitants "kind."

Given the fact that Priscilla's Dagger deals Occult Damage, and due to the Painted World of Ariamis also being filled with various things that are associated with the goddess Velka (weapons and relics that pose a threat to the gods), it's possible that Priscilla may have had something to do with Velka, which may be a major reason why she was locked in the Painted World in the first place.

This is a single attack that has good forward range and tracks quite well to both sides. While it is fairly damaging, it can be blocked but not parried. This attack also causes Bleed upon hitting or being blocked.

Virtually the same as the Single Slash, but with two slashes instead, once from right to left and then left to right. There is a large gap between attacks, and can also track the player.

After a short delay, Priscilla blows a concentrated cloud of blue particles directly in front of her or in a sweeping motion. The resulting cloud lingers for a few seconds afterward. This attack deals a large amount of damage and is difficult to block.

Priscilla turns invisible, whilst still being able to attack the player. Leaves large footprints in the snow. 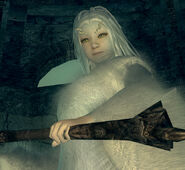 Size comparison between the Chosen Undead and Priscilla 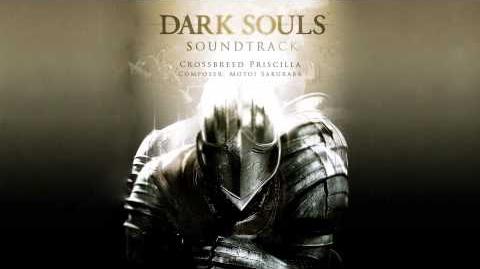