The Crest Shield is a medium shield in Dark Souls.

Shield of a nameless knight, likely a high-ranked knight of Astora.

One of the enchanted blue shields. The Crest Shield greatly reduces magic damage.

The Crest Shield is dropped by Oscar, Knight of Astora upon revisiting Undead Asylum. He spawns where the player first left him at the beginning of the game.

What sets the Crest Shield apart from other medium shields is its massive 80% magic reduction. This makes the Crest Shield a powerful asset when facing magic-dealing enemies. When used in conjunction with miracles such as Great Magic Barrier, the player can become virtually immune to magic damage.

The Crest Shield has medium deflection and a normal parry speed.

*While shield is up the player is actively blocking 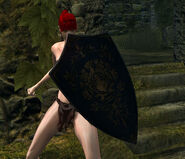 Add a photo to this gallery
Retrieved from "https://darksouls.fandom.com/wiki/Crest_Shield?oldid=314134"
Community content is available under CC-BY-SA unless otherwise noted.