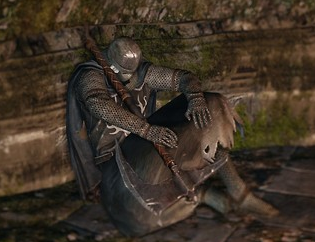 Creighton the Wanderer, or Creighton of Mirrah, is a character in Dark Souls II.  He is voiced by Joe Sims, who also provided the voice of Magerold of Lanafir.

When first met, Creighton claims to be another warrior who has come to Drangleic searching for adventure. However, his words are far from true. Creighton is allegedly an infamous serial killer from Mirrah who is willing to kill just for the pleasure of it. He's known for his animosity towards his former partner, the equally treacherous Mild-Mannered Pate, and during the course of the game he pursues him in order to satiate his lust for revenge.

Although he accuses Pate of being a manipulative and deceiving individual, Creighton is no different from his nemesis. Creighton appears to be able to hide his homicidal nature to the player and he constantly tries to convince the player that Pate is the one who should not be trusted.

Creighton also seems to have a penchant for imitation equipment. The description of his armor set indicates that his armor is an imitation of the one worn by Mirrahian soldiers. His weapon also appears to be an imitation of the legendary Dragonslayer's Crescent Axe which was wielded by the legendary Forossan general Shieldless Lothian. It can be noted that the axe that Creighton uses doesn't have the lightning damage effect of Lothian's axe, which implies that Creighton's axe is indeed an imitation.

Creighton is first encountered in the Huntsman's Copse. He is locked away in a cell containing the Undead Lockaway bonfire and needs the player to free him using the Undead Lockaway Key. When spoken to, he claims he had accidentally locked himself in a cell which was supposed to be a trap for Mild-Mannered Pate, his treasure hunting partner. Before leaving, he stresses that Pate is not to be trusted, calling him a "backstabbing knave," and announces his intention to find and kill Pate as retribution for his many alleged misdeeds.

In Scholar of the First Sin, he can be summoned as a white phantom to assist with the Skeleton Lords boss fight after exhausting his dialogue in Huntsman's Copse. His sign can be found in the cave full of Skeletons near the Undead Lockaway bonfire.

Creighton can later be found in the Shaded Woods. He will tell the player that Pate lives near Brightstone Cove Tseldora, and gleefully anticipates finally tracking him down.

He can be found for the last time at Brightstone Cove Tseldora, engaged in a fight with Pate. The player may choose to help either one. The Tseldora Den Key will be obtained from the survivor of the fight given that the player has dealt enough damage to the other; in that case the survivor will also attempt to kill the player with a booby-trapped chest. Creighton's armor set will be obtained from Creighton only in the case that you help him defeat Pate. If the player assists neither and lets them fight to the death, the survivor will not give the player the Tseldora Den Key and it will become unobtainable.

If the player talks to Cale the Cartographer in Majula after meeting Creighton, he will tell a story about a serial murderer from Mirrah. Before the man's execution, he escaped, and was never seen again. Cale claims he recently saw a man strikingly similar. Cale cannot recall the man's name but says it was something along the lines of "Cray".

Close up of Creighton's mask 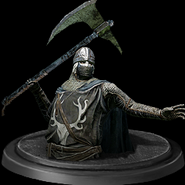 Creighton's unused trophy
Add a photo to this gallery

Retrieved from "https://darksouls.fandom.com/wiki/Creighton_the_Wanderer?oldid=334723"
Community content is available under CC-BY-SA unless otherwise noted.