Start a Wiki
watch 01:18
'Dark Souls II' - 11. Covetous Demon perfect battle
Do you like this video?

The Covetous Demon is a boss in Dark Souls II.

The Covetous Demon takes the appearance of a grotesque creature whose body looks somewhat similar to the real life mole-rat. It has slimy skin, large forelegs (but seemingly no hind legs), and a tail. It also has a large mouth with many sharp teeth.

The albino miniboss version found in Frozen Eleum Loyce is almost identical to the boss version, albeit much more resilient.

The Covetous Demon was once a man who fell in love with Queen Mytha, but she did not return his affections. He expressed his desire through excessive eating and eventually this gluttony transformed him into a ravenous abomination.

The Covetous Demon's attacks are relatively easy to avoid, predictable or both. Most are short ranged, although the jumping attacks can cover a lot of ground. It also gives the player ample time to counterattack after some of its attacks are performed, making for a rather easy boss.

In the room prior to the arena, two pots hang from the ceiling containing Undead Laborers; they can be released via any projectile that is capable of breaking jars (spell projectiles aimed via Binoculars, as well as any arrow type that is capable of breaking such objects i.e. Iron Arrows). This teaches the player that these enemies can be used as distractions inside the boss arena, where four such pots are present. Shooting one of these pots and releasing the Laborer within will cause it to cower and distract the Covetous Demon, which will ignore the player in favor of devouring its new prey. The Covetous Demon will devour the Undead Laborer over a period of several seconds, giving players plenty of time to deal damage. However, beware that the Covetous Demon will take 80% less damage while eating, though it will also remain still for a while after it is finished eating the Laborer, during which it will take full damage from attacks.

Melee builds could face more of a challenge than range as getting close to him from any side can be perilous, especially when one is at his sides as he can roll, dealing heavy damage.

Being in front of the Demon may cause him to perform a grab attack where he picks up the player in his mouth, unequipping all the player's items in the process. This can be disastrous as finding time to re-equip the items mid-fight can be difficult. Always try to stay away from the Covetous Demon's mouth at all times, resorting to ranged combat instead if necessary and using the Undead Laborers as distractions where possible.

The demon found in Frozen Eleum Loyce is similar to the one in the Harvest Valley, albeit the battle takes place in a much wider room and there are no pots containing hollows with which to distract the creature. The demon itself is much more resilient to damage and it will take considerably more hits before it succumbs.

If Maldron was allowed to escape through the big gate in the upper area, he will come to this place and attack in conjunction with the demon, making the fight considerably harder. The player should also take care of not getting near the exit tunnel on the far right, as it contains two Ice Rats that may join the battle.

Claw Swipe: The Demon pulls its forearm back and swipes. Has moderate tracking, so if dodging, do so when it actually swipes.

Crush: Readies its body briefly, then rolls sideways towards the player. It can do this twice in a row.

Tail Slam: Lifts its tail into the air, then slams it down two or three times. Done when the player is behind the demon, it is a good chance to attack the front or sides of the boss.

Leap: The Demon pauses for a moment, then jumps into the air in an attempt to land on the player. Roll out of the way as it is jumping.

Vomit: The Demon spits out multiple balls of an unidentified liquid. They have a rather short range, so simply run away from the Demon to avoid.

Eat: Grabs the player with his mouth and chews on them a few times, dealing heavy damage. All the player's items are unequipped (armor, weapons, rings, etc.). If this happens, find an opening after one of its attacks and re-equip one item at a time. Due to the ease of dodging its attacks, a weapon and possibly shield are all that really need to be re-equipped.

Side view of the Covetous Demon 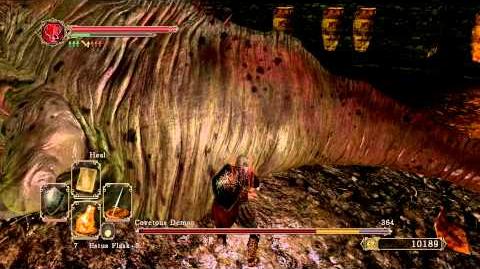 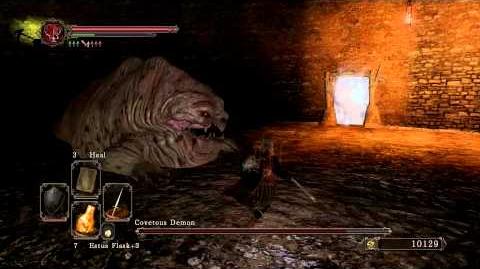 Retrieved from "https://darksouls.fandom.com/wiki/Covetous_Demon?oldid=319328"
Community content is available under CC-BY-SA unless otherwise noted.